Prominent Chemist: Great Career, Great life – You Can Have Both

You can have a career in science and still “have a life,” said internationally recognized chemist Professor Dame Carol Robinson at Xi’an Jiaotong-Liverpool University on May 6. 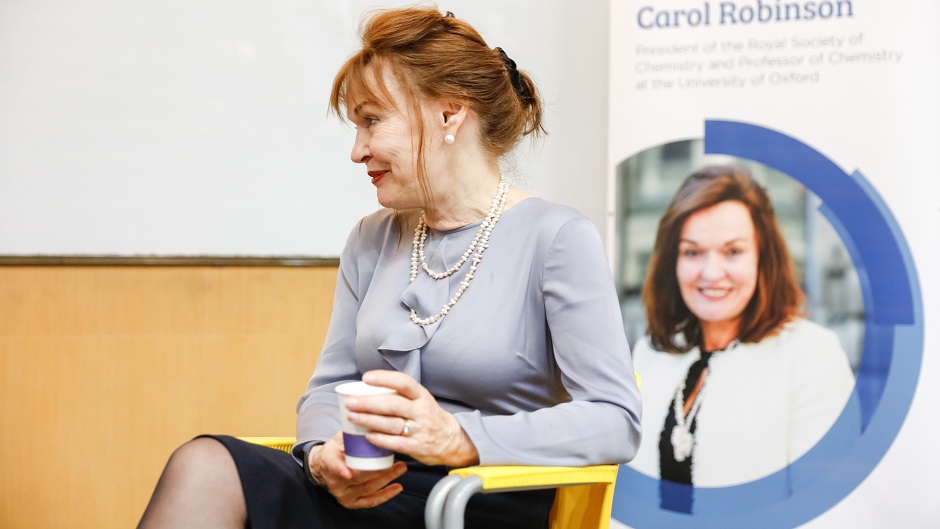 During an interview before her talk, she said that more acceptance of taking a break while climbing the career ladder might encourage aspiring scientists.

“There’s a lot of emphasis on going directly from university to academic to professor without any career break, but quite often both men and women want to take a break for family reasons,” she said.

“I think the acceptance of that would make it seem like a more forgiving career.

“Often people say to me, ‘It’s just too hard. I want to do something where I can have a life.’ And that’s a shame because you can have a great life and be a chemist.”

Professor Robinson took a break from academia for eight years while raising her children. She then returned to continue a successful career recognized with many accolades, including her recent 2019 Novozymes Prize win for innovative use of mass spectrometry for proteome analysis.

Appointed the first female professor of chemistry at both Oxford and Cambridge universities, she also holds the title of Dame Commander of the Order of the British Empire for her contribution to science and industry and has eight honorary doctorates.

The prominent chemist was introduced to the mass spectrometer while working as a laboratory technician after leaving school at age 16. She took the job at Pfizer pharmaceutical corporation because it was close to home, not knowing what the job would entail.

“It’s quite interesting that I really felt an affinity for the technique and stayed with it for the rest of my career,” she said.

Professor Robinson said she hoped her talk would inspire those interested in science to continue in the field and give them confidence they could have a career like hers.

“I often say I’ve had a great career, and I’ve really enjoyed it. I would like to think they would also really enjoy it,” she said.

Those who aspire to be scientists – women in particular – can take heart from her example and from growing societal support for family leave, she said.

“If you need to take maternity leave, that’s perfectly acceptable in today’s society,” said Professor Robinson. “These different career paths can be recognized and celebrated.”

The Royal Society of Chemistry accredited XJTLU’s BSc Applied Chemistry program in 2016. XJTLU was the first independent Sino-foreign university in China to achieve this accreditation for its undergraduate degree program.

Professor Robinson’s talk was organized by XJTLU, Soochow University, and the Royal Society of Chemistry.