Nearly 500 brochures promoting the new train were also on display at the two-day fair, designed by staff and students from the Department of Industrial Design at Xi’an Jiaotong-Liverpool University.

The XJTLU team created the brochures, which were well-received during the event, after being approached directly by China Railway Rolling Stock Cooperation (CRRC). 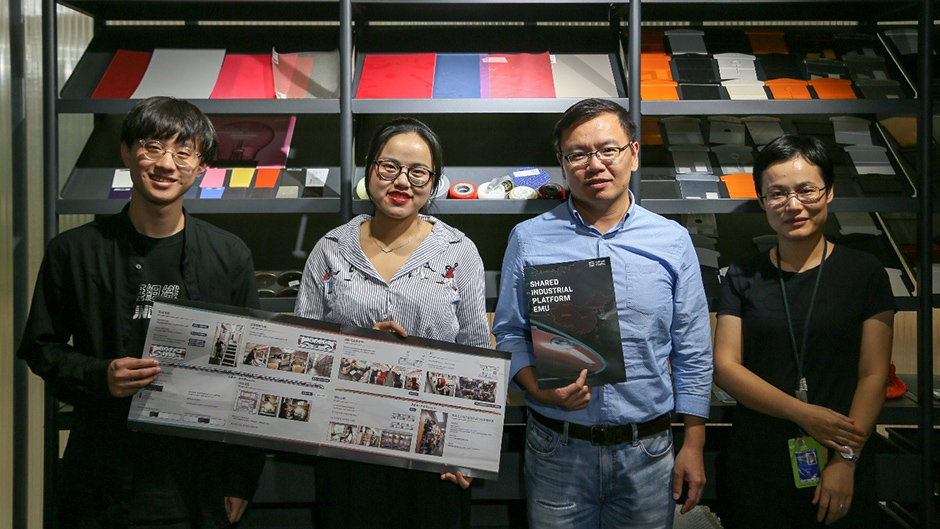 This is the first time the CRRC has worked with the Department of Industrial Design at XJTLU. Dr Chenghong Luo, from the department, said the collaboration came about after CRRC identified XJTLU’s strengths in international design.

“Many other universities expressed their interest in getting involved but CRRC wanted the brochure to be unconventional, modern and bilingual,” he said.

“The innovative design styles and international quality at XJTLU met their needs.”

During the project, Junhui Huang, deputy chief engineer of the CRRC and leader of the new electric train project, visited XJTLU to discuss the collaboration in more detail.

As fast as a high-speed train: how the copywriting was approved by the CRRC 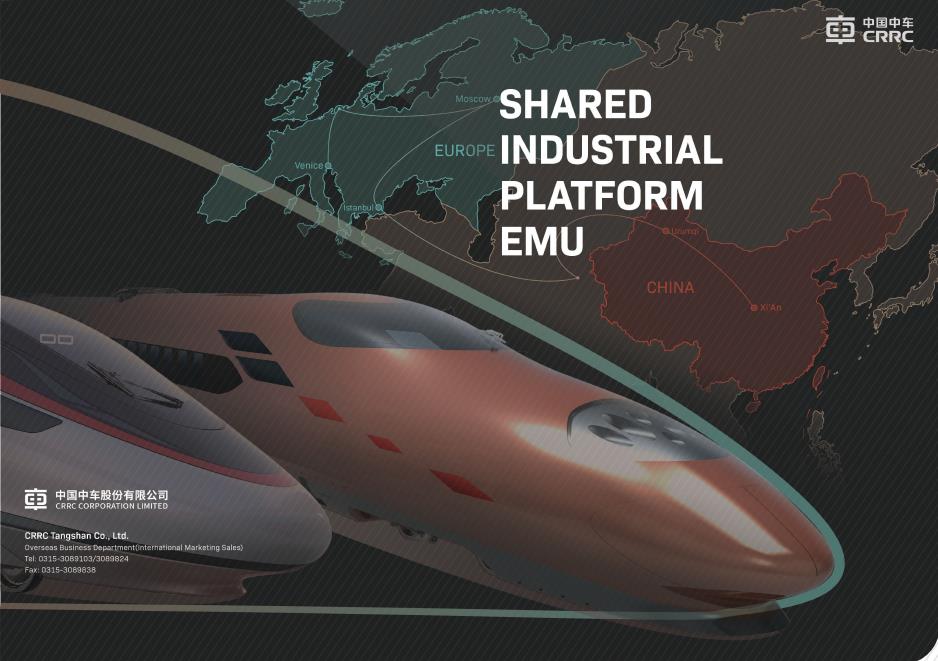 “Instead of creating copy, the CRRC gave us a 200-page design manual, from which we had to extract the key information ourselves.

“I was reading constantly during the first two weeks of the project. Fortunately we received a strong brief from Mr Huang so the messages I pulled out were exactly what they wanted to emphasise. That’s why the copywriting stage was approved so fast.”

A masterstroke inspired by Dr Luo 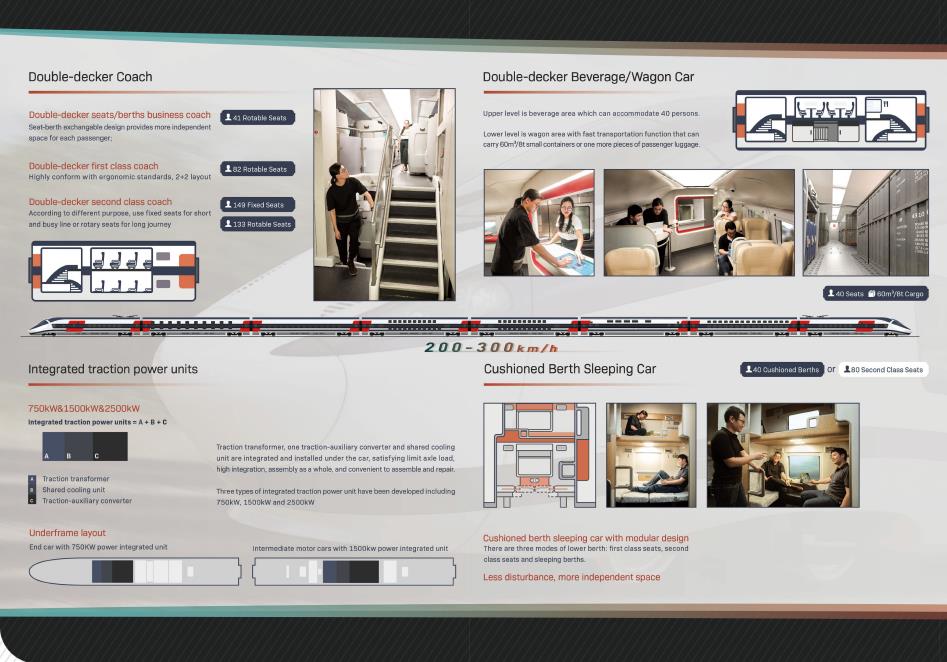 “Have you noticed the locomotive on the picture above? Imagine what the page would be without it – the whole design would be less effective.

“The original version didn’t have the locomotive in the background. My classmate Di Ba and I thought there was too much empty space but we couldn’t decide on a better solution.

“At that time, Dr Luo inspired us, suggesting we could use a locomotive to fill the blank space without adding new content, and it also resonated with the design of the whole brochure.”

Putting the train in the frame 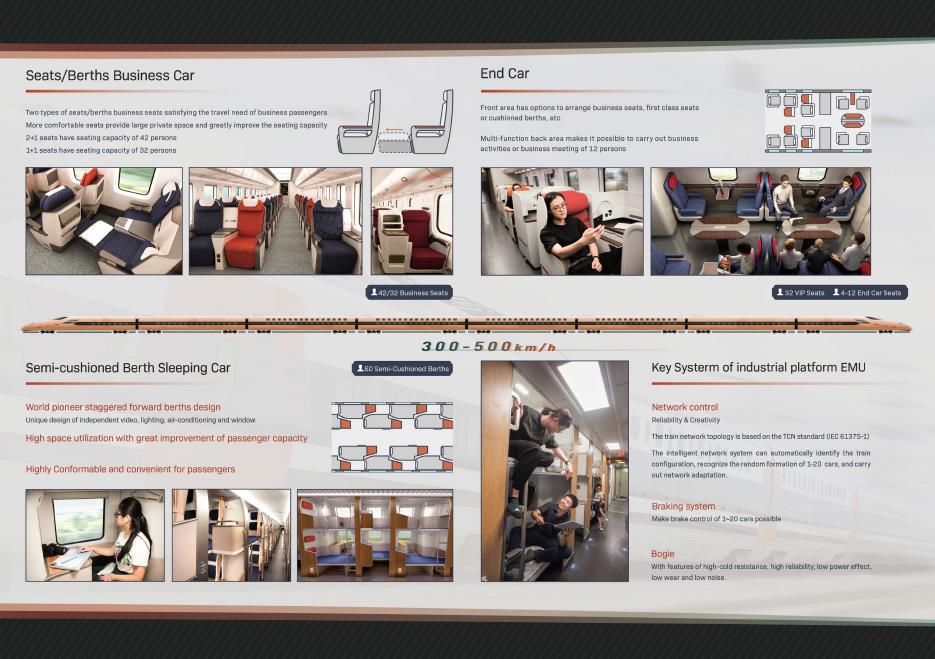 “At first, we used material provided by the CRRC, but we thought photos taken on a real train would produce better results.

“The prototype – which no one had been on before except the engineers – was in Tangshan. We asked the CRRC if it would be possible to photograph it.

“When they agreed, the students bought tickets to travel to Tangshan straight away.

“They specifically bought berth tickets on the D312 train, because its interior design is very similar to the one in the brochure.

They wanted to experience it in advance and get some inspiration.

“For the photography, they set up the scenes and poses, and even modeled themselves. The outcome was great – both our team and the CRRC were satisfied.”

Designers: keeping a balance between heads and hearts 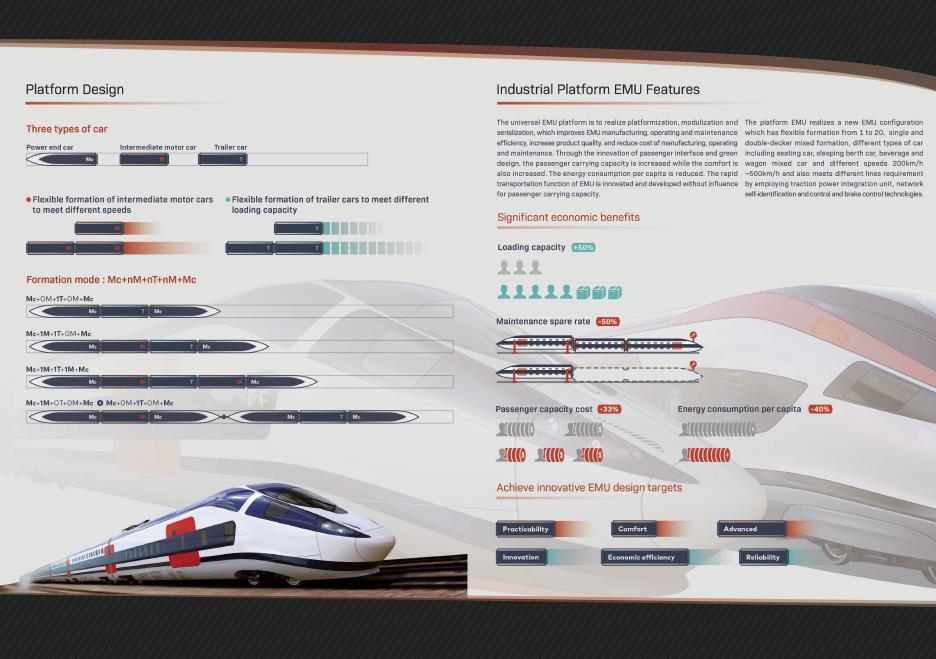 “To finish a brochure, designers must be able to extract messages and figures, and to display that information in a visual way. Graphic design skills and aesthetic taste are necessary.

“During lectures and daily exchanges, I have found that Xingjian and Di Ba are two students who keep a good balance between their heads and their hearts, which means that they are strict with themselves.

“When approaching a design, the first round of examination they need to pass is their own. We teachers could not be more reassured to hand the project over to them because we know that their work is always produced with a lot of thought.

“For example, on this page (pictured above), Xingjian employed gradient colour blocks to display the change of speed. He also carefully drew some carriages with doors and windows to make it look more like a real train.

“Such details were not required but they reflect his own high standards and ability, and the details took the design of the brochure to a new level.

“When communicating with Mr Huang from the CRRC, we could sense the importance they attached to the project, and the high expectations they had.

“The CRRC’s satisfaction with the project demonstrated that they recognised the achievements of XJTLU’s design education.”