CUCAS News > Admission Express > How Will China Open Its Border for International Students in 2022: 5 Possible Ways

How Will China Open Its Border for International Students in 2022: 5 Possible Ways

Summary: China has closed its border for international students and almost all foreigners since March 28, 2020 due to the pandemic. It has been about 2 years that foreign students cannot come to China, but there are still possibilities that C...

How Will China Open Its Border for International Students in 2022: 5 Possible Ways

Possible Way No.1: Open for International Students from Some Countries First Like Russia, South Korea, etc.

But when China opens its border to Russian students, It is reasonable to believe that it will also slowly open for international students from some other countries such as countries in the "Belt and Road Initiative" and ASEN countries due to cooperations and economic relationships, especially for those countries which have well controlled the pandemic.

And if China opens its border for some countries, it is a signal that China will open for more countries, and we believe related standards and conditions will be announced shortly.
Possible Way No. 2: Open for Some International Students First.

Especially for master and Ph.D. degree students currently in their last year of study, they have to do some researches, projects, experiments, and a lot of communications, yet obviously, online education is not a good way for them and they should enjoy enough priority to come to China to complete their degree successfully.

It is possible for China to allow those students to come back to China first since it is in accordance with China's policy of training advanced personnel with high quality of education.
Possible Way No. 3: Allow Students in Some Programs to Enter China First.

Some countries like Pakistan have issued policies stating that the degree students get by completely online education might not be recognized by their commissions. For example, in those medical programs like MBBS and clinical medicine, usually students for medical programs have to learn face to face and need to learn by doing a lot of physical experiments otherwise they cannot fully get related knowledge.

And some programs like mechanical engineering, education, also require students to do some internships to absorb important knowledge and experience before they can graduate. Some Chinese universities are also communicating with the government to allow them to come back to China to solve these critical issues.
Possible Way No. 4: Open Some Provinces/Cities for International First.

It is now the third year for China to close its border for international students, and the bachelor degree in China, in most cases, is just 4 years, China is also unlikely to close for a longer time, since the pandemic has already brought significant influence to China's international education industry. Some programs for international students have been closed or suspended. And China is possible to open some provinces for foreigners first. Those provinces have well-controlled the pandemic can be opened first, so the government can see the result and adjust policies and protocols wisely and gradually. Since close because of the pandemic is also influencing the economy.

Some places such as Hongkong, Shenzhen, Shanghai, Zhejiang are possible to be opened slightly for more foreigners in 2022.

Possible Way No. 5: Open for International Students of Some Universities First.

1. Take vaccines. Even China opened its border for all foreign students, we believe that the government will demand foreigners to take WHO-approved vaccines and show related certificates before coming to China.
2. Do necessary tests like the nucleic acid test. Taking vaccines is not enough, it is highly possible that you need to take some other tests like a nucleic acid test before you can come to China in 2022.
3. Get ready for quarantine. Now foreigners who are allowed to enter China need to be quarantined for 28 days right after they arrived in China. We believe this policy will change according to real time situation, but it is unlikely to be completely abandoned in 2022, before the world could terminate the COVID 19 pandemic completely. So you are suggested to bring some necessary goods for the quarantine before you land on the airplane to China.


Hope the pandemic can be terminated in 2022 and all foreign students could come to China soon! If you have questions regarding study in China 2022, please feel free to contact our counselors below: 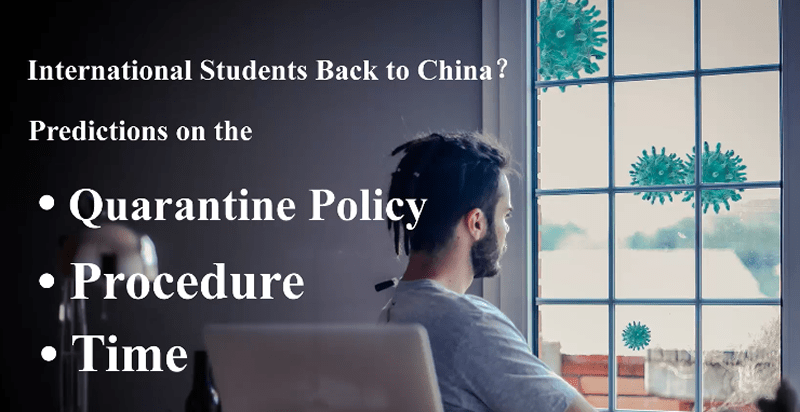