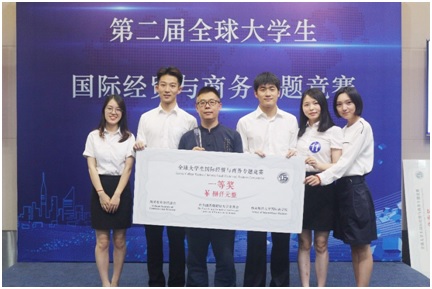 From May 19 to 20, the Global Collegiate International Trade and Business Competition took place in the Liuling Campus of Southwestern University of Finance and Economics (SWUFE). The finals were co-organized by SWUFE, Sichuan Association of Business Economics, and the Branch Committee of the Communist Youth League. Headed by Zhang Geng, a teacher from XMU School of Economics, the XMU team signed up for the competition and brought home championship. The team consisted of five postgraduate students from the Department of International Trade of XMU School of Economics who were respectively Su shuitian, Mao jinyi, Hu Yiting, Wu Jing and Zhang Yingqin.

Themed “globalization and institutional evolution of Chinese enterprises”, this competition aimed to clarify the interactive mechanism as well as new dynamic and new routes with regard to the globalization and institutional evolution of Chinese businesses against the backdrop of the “One Belt and One Road” initiative. The competition went on for over two months, including the preliminaries and the finals. Students from 21 universities in China submitted a total of 63 works, and the work One Belt and One Road Helps Min Merchants to Step into the World: A Research Based on Hengxing Group’s Vietnam Steel Plant Investment Case submitted by the students from the XMU School of Economics successfully made it to the finals. It explored how the Fujian entrepreneurs have taken the occasion of Belt and Road initiative to go global through in-depth case analysis.

The finals lasted for two days. At the outset, all the teams were required to defend and demonstrate their work in English. Following that, by drawing lots, a brand new case was handed to each of them for processing, including analysis, writing a report, demonstration and oral defense. Under the guidance of Zhang Geng, the XMU team pooled their efforts together to quickly work out a high-quality case analysis report within a very short time. Meanwhile, they smoothly demonstrated their report and accurately answered the questions from the judges with fluent English and quick wit, which earned them the top spot in the competition and eventually brought honor to their alma mater.

Through this contest, the participating students have broadened their horizons, honed their skills to think globally and further enhanced their analytical abilities. The team from XMU School of Economics impressed their peers and the judges with their excellent academic skills and high morale, which fully showcased the remarkable achievements of the School of Economics of XMU in terms of its elite-fostering strategy and its globalization of the academic disciplines.