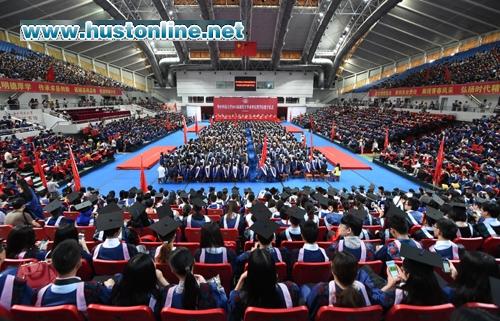 On June 22nd, 2015-HUST Graduate Commencement and Degree- Granting Ceremony were held in the Optical Valley Stadium. Some HUST leaders and heads of different schools and departments granted the degree to about 6000 master and doctor graduates.

In the commencement, HUST President sent his best wishes to the graduates. In his remarks, he hopes that they can be kind, truth-seeking, and extraordinariness-pursuing; be grateful for favors received and appreciate their family; be broad-minded and reward the nation.

Zhang Xiaolun, HUST 82-alumnus, vice party group secretary and deputy general manger of Dongfeng Electric Corporation shared his experiences in career with graduates and hoped that everyone can set their direction, work wholeheartedly, be bold to compete, be good at transferring and combine their personal future with national development and social progress.

HUST Deputy Party Secretary Zhou Jianbo announced the decision of degree granting. HUST Deputy Party Secretary Ma Jianhui announced the decision on praising the excellent master and doctor graduates of 2015 and the decision on praising the master and doctor graduates of 2015 working in western poor areas, grassroots communities and national key agencies. The commencement was presided over by Feng Zheng, standing vice dean of School of Graduate. Heads of different schools and functional departments as well as some MA student advisors attended the ceremony.