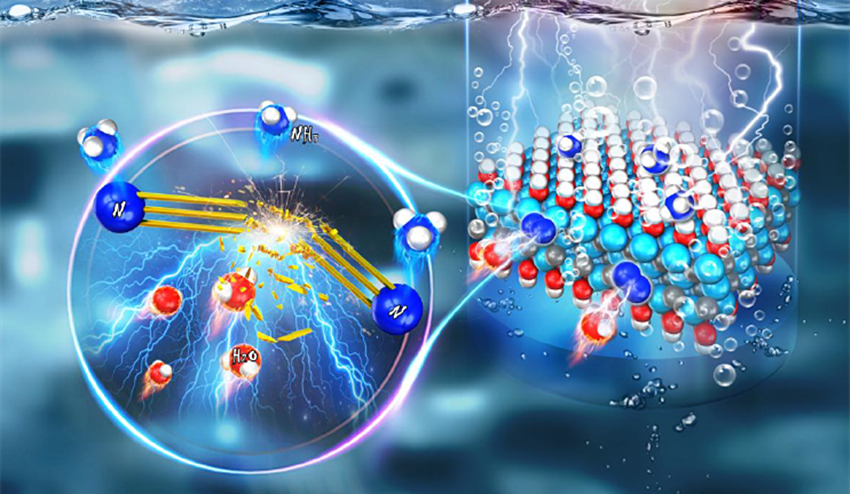 Scientists of SCUT discovered an efficient electrocatalyst that can be used for nitrogen fixation under ambient conditions, which is vital for reducing negative impact of synthetic ammonia industry on energy consumption and environment.
The study was finished by a team led by Professor Wang Haihui at SCUT’s School of Chemistry and Chemical Engineering. Their work, “Efficient electrocatalytic N2 fixation with MXene under ambient conditions”, was published on the journal Joule recently.
Ammonia is a basic raw chemical material used in modern industry and agriculture, but its artificial production still heavily relies on an energy-intensive process, the Haber-Bosch process, which needs to be carried out under high temperature at 300-500 ℃ and high air-pressure at 200-300 atm.
Since this traditional method uses more than 1% of global annual energy consumption and produces carbon dioxide emissions, it is necessary to develop an ammonia synthesis process that can occur under mild conditions and to alleviate the negative impact of synthetic ammonia industry on energy consumption and environment.
One potential option for solving the issue is electrochemical conversion, which, compared to the Haber-Bosch process, can be carried out to synthesize ammonia from water and atmospheric nitrogen theoretically under ambient conditions.
However, this strategy has been subjected to an ultralow efficiency because of the poor selectivity in the high majority of catalysts, and the development of efficient catalysts for the electrochemical ammonia reduction reaction (NRR) is still a major challenge for artificial nitrogen fixation under ambient conditions.
Now the latest research done by Wang Haihui’s group provides a new insight into the rational design of NRR catalysts with a suitable atomic and spatial structure and hydrogen evolution intensity towards efficient nitrogen fixation.
The group reported that the two-dimensional metal carbide (MXene) can be used as a catalyst for highly efficient and robust nitrogen fixation through an electrocatalytic NRR under ambient conditions.
The MXene nanosheets attached to vertically aligned metal host can achieve a high faradic efficiency of 5.78% at an ultralow potential for ammonia electrosynthesis.
Researchers believe that at present, electrochemical ammonia synthesis is not efficient enough to be compared with the Haber-Bosch process, but if more efficient nitrogen fixation catalysts can be developed, especially if the driving energy in the electrochemical ammonia synthesis process can be supplied by sustainable green energy, it will be not only capable of overcoming the problems of high energy consumption, pollution and safety caused by the Haber-Bosch process, but also can reduce the high cost of the energy consumption.