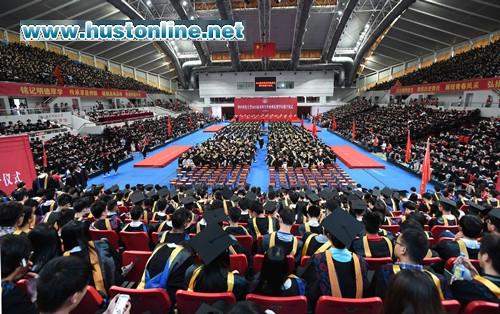 On the morning of June 19th, 2015-HUST undergraduate commencement & degree granting ceremony were held in Optical Valley Stadium. HUST President Ding Lieyun sent his heartfelt wishes to the graduates. In his remarks, he hoped that “wherever you are, be a responsible and self-cared HUSTer, be a sober and prudent HUSTer, be a unique and innovative HUSTer and be a noble and ambitious HUSTer.”

He pointed out that as a new generation of HUSTer, these graduates are in their most dynamic age to realize their dreams and the following 30 years will be their most wonderful 30 years; it’s also the 30 years when the gradual realization of Chinese dream will be witnessed. In this era full of vibrant changes and faced with the new beginning of life, these graduates should shoulder the heavy responsibility of rejuvenating the nation so that they will become a HUSTer not ashamed of themselves and the era. He expressed that HUST will always back up them and be proud of them.

Zhou Jianfei, the representative of student’s parents and father of Zhou Yifeng and Zhou Yiyu from School of Optical and Electronic Information made an address in the ceremony, in which he expressed his heartfelt gratitude for HUST’s cultivation of his children and his wishes to all the graduates that they should hand down HUST spirit, seize on the opportunities granted by the era, keep a grateful attitude and have the ambition to reward the nation.

The graduate representative Chen Jiale from School of Electrical and Electronic Engineering recalled his growth in HUST and the development of the university and expressed his gratitude to the university, teachers and schools in his address. He said: “the deepest impression HUST has left on me is that it granted me various kinds of possibilities to touch the world.”

As the representative of alumni, Wang Haibing, founder and CEO of Taomee expressed his nostalgia for alma mater and the youth spent there. “Alma mater is just like your second hometown and you always want to come back and have a look.” Through his own growth and experiences, he sent a few remarks to the graduates: be bold to choose- choose to take actions rather than complain, choose to become excellent rather than mediocre, choose to believe rather then doubt and choose to go all out rather than reserve. Use a pure heart to believe and keep confident, go all out to get things well done and become an excellent, responsible HUSTer.”

In the following degree granting ceremony, HUST Leaders and heads of schools and departments granted degree to the students one by one. They shook hands, sent wishes and took photos for memory.