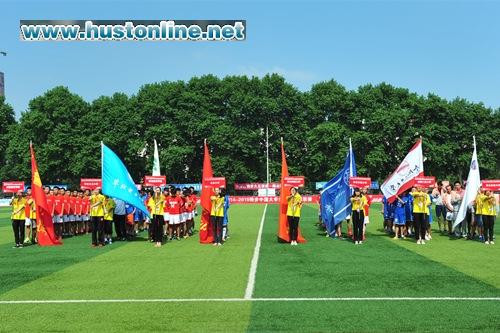 On June 23th, 2014-2015 the university-group final of Xtep China University Football League （CUFL） was held in the central playground of HUST. HUST Team defeated the Peking University Team by 3 to 0: a great triumph in the opening game.

8 teams will compete for the champion for the next 8 days. They are: Hong Kong Institute of Education, HUST, Hefei University of Technology, and Armed Police College from the south region, Peking University, North China Electric Power University, Xi’an Jiaotong University,and Northeast University for Nationalities from the north region.

CUFL was established in 2000. Sponsored by FUSC and China Football Association, it is the only 11-person system football league approved by MOE and known as the Fisrt League of Univeristy Football. The schedule of the league spans two years from the September to next July. This year’s league has attracted the participation of nearly 600 teams, a record new high. The league is divided into threes phases: the provincial competition, the regional competition and the grand final. The provincial competition is organized by the province itself（ autonomous region and municipalty）.  The regional competition is divided into the north competing area and the south one. The former comprises 17 provinces, autonomous and municipalities including Shanghai, Jiangsu, Anhui. The latter 16 provinces, autonomous and municipalities including Beijing, Tianjin and Hebei. The top four teams in the South and North region will compete in the grand final.

The grand final of CUFL was hosted by Office of the leading group of the National Youth University Football and FUSC, co-organized by Football Association of FUSC & Sport Health and Art Department  of Hubei Provincial Department of Education and undertaken by HUST. It’s known that in order to hold the league well, HUST has made thoughtful preparation in safety, catering & accommodation and medical care. Nearly a hundred volunteers from different schools attended the competition, offering volunteering work.