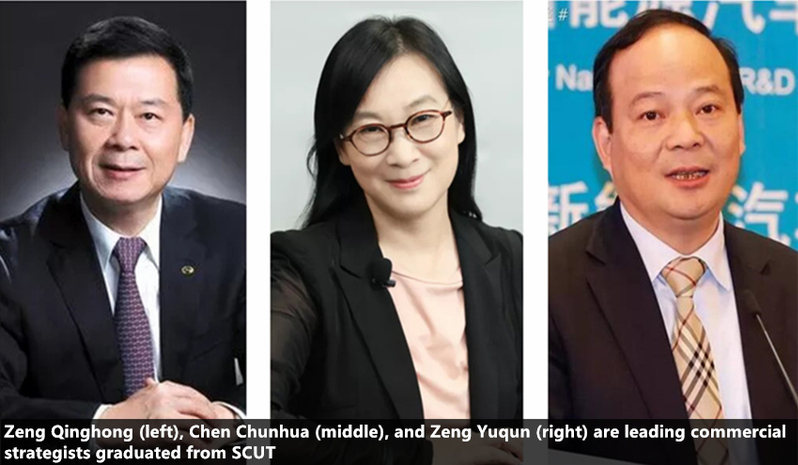 With Ren Zhengfei, founder and CEO of Huawei Technologies, seating at the first place, the ranking took eyes on the biggest entrepreneur names that appeared in the center of China’s economy, including Pony Ma of Tencent, Jack Ma of Alibaba, Hui Ka Yan of Evergrande Real Estate, Dong Mingzhu of Gree Electric Appliances, and Lei Jun of Xiaomi in the top 10.

Among these 50 commercial strategists were Zeng Qinghong at the 22nd place, Chen Chunhua at the 41st, and Zeng Yuqun at the 50th, all of whom are alumni of SCUT.

The values of these business leaders were not only reflected in the successful moments of their companies, but also, most importantly, in their willingness to face challenges as well as help their company through a crisis, find new direction and stride for the next success, Fortune China said.

Zeng Qinghong, Chairman of Guangzhou Automobile Group (GAC), received a PhD degree from SCUT in management science and engineering. Before taking the helm of GAC in 2016, he worked in China's automobile manufacturing industry for nearly 40 years, and has now witnessed the growth of the company from producing less than 10,000 to two million vehicles per year.

Chen Chunhua, who majored in radio technology when she was an undergraduate at SCUT, is currently a professor at the School of Business Administration of SCUT. She used to serve several business executive positions including CEO of New Hope Liuhe, and is well known among the public and the academy as a "CEO professor" for having rich experience in real business management, a unique quality that most university scholars may hardly acquire.

Zeng Yuqun graduated from SCUT with a master's degree in electronic and information engineering. After engaging in the battery industry for two decades, he is now the founder and Chairman of Contemporary Amperex Technology (CATL), the world's largest supplier of batteries for electric vehicles that develops R&D and manufacturing capabilities of full industrial chains.