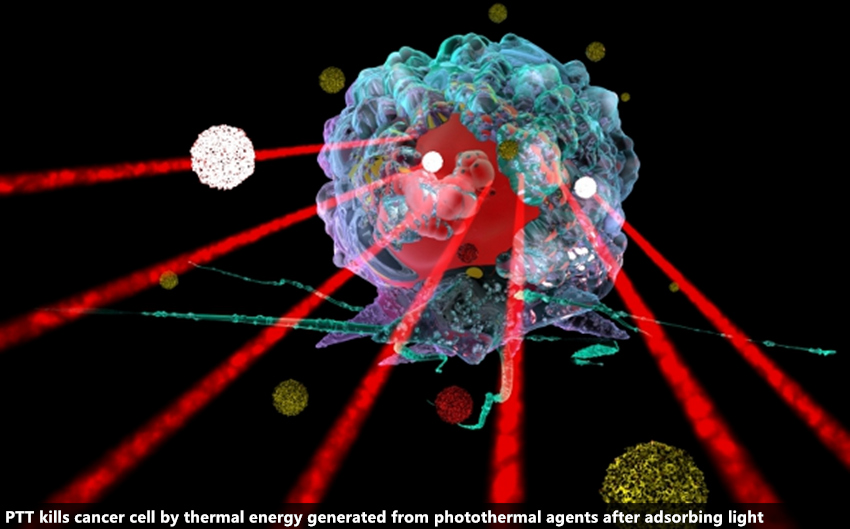 Scientists of SCUT and their colleagues have found a unique form of nanoparticles, which, by working together with a type of drug called autophagy inhibitors, may achieve superior therapeutic effect against drug-resistant cancer.
The project was a collaborative work led by Professor Wen Longping at SCUT’s Institute of Life Sciences, Professor Cao Jie at SCUT’s Second Affiliated Hospital, and Professor Zeng Jie at the University of Science and Technology of China.
Their research, “Harnessing copper-palladium alloy tetrapod nanoparticle-induced pro-survival autophagy for optimized photothermal therapy of drug-resistant cancer”, was recently published on the journal Nature Communications.
It is known that a major cause of failure in the treatment of cancer is the presence or development of drug resistance by the cancer cells. Currently, one of the approaches to address this problem is combining conventional chemotherapy with photothermal therapy (PTT), in which tumor cells are killed by thermal energy generated from photothermal agents after adsorbing light.
Even though this synergistic approach, termed chemo-photothermal therapy (chemo-PTT), offers a viable strategy for complete tumor eradication, the majority of the reported chemo-PTT studies are limited in employing conventional chemotherapeutic agents, and in these circumstances chemo-PTT would be self-defeating for drug-resistant cancer.
Now scientists may have found an angle to solve the issue. According to the above-mentioned research, TNP-1, a tetrapod copper-palladium alloy nanoparticle, can be used as a photothermal agent that exhibits a high level of photothermal conversion efficiency.
Another aspect of this method is the ability to induce pro-survival autophagy, which is a protective process that aims to increase the cancer cells’ resistance to the therapy. To deal with it, researchers then added certain drugs that can inhibit the process of autophagy, elicit death of cancer cells, and thus greatly enhance the efficiency of eradicating drug-resistant cancer.
Further studies showed that the strategy has a remarkable synergistic effect in triple-negative (4T1), drug-resistant (MCF7/MDR) and patient-derived breast cancer models.
The strategy, utilizing autophagy inhibitors rather than traditional chemotherapeutic agents, created a new vision for the development of chemo-PTT, particularly when dealing with drug-resistant cancer.
The work was supported by grants from several programs of national and provincial level, including the National Key R&D Program of China, the National Natural Science Foundation of China, as well as the Program for Guangdong Introducing Innovative and Enterpreneurial Teams.