Concert Held in City to Celebrate 66th Anniversary of SCUT 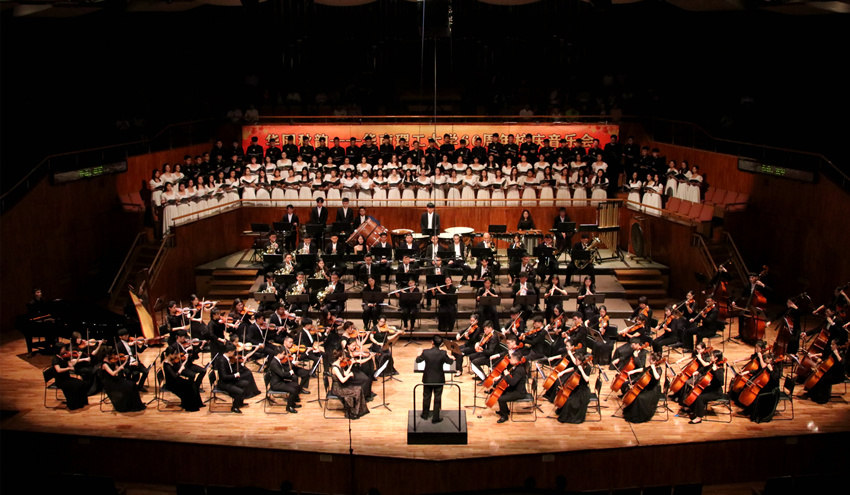 The Rhyming Autumn of SCUT, a musical performance presented by faculty and students of SCUT, was last week held at Guangzhou's Xinghai Concert Hall to celebrate the university’s 66th birthday.
The concert, with Dmitri Shostakovich's Festive Overture as the opening, was an ensemble of western classical music and Chinese modern music, as well as music created by composers of SCUT.
Young teachers and the Youth Symphony Orchestra of SCUT played a number of long-established musical works, including Rachmaninoff's Piano Concerto No. 2, Bach’s Concerto For 2 Violins, and Tchaikovsky’s The Nutcracker Suite.
University Festival Overture, an orchestral work composed by Musical Pulitzer Prize winner Zhou Long to celebrate SCUT's 60th anniversary in 2012, was also spotlighted in the evening.
The hottest minute came with the Song of SCUT at the end of the concert, when the Chorus of the School of Arts chanted the university’s motto: “study extensively and reflect carefully, discriminate clearly and practice earnestly”.
On November 17, 1952, the South China Institute of Technology (renamed the South China University of Technology in 1988) was established by merging the engineering schools and departments of a number of major universities from five provinces of China.
The reorganization brought engineering faculties with the strongest academic strengths in central and southern China to assemble in Guangzhou, as it carried the whole nation’s expectation of developing science and technologies, and supporting social and economic development with higher education.
After 66 years of fulfilling these duties, we SCUT people are honored and proud, with our heartfelt blessings to its pursuit of building a world-class institution.