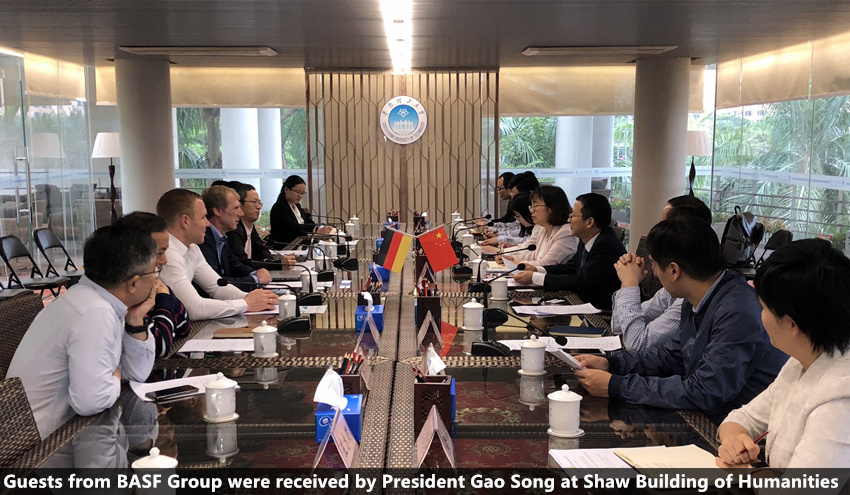 A group of representatives from BASF Group, a leading global chemicals producer based in Germany, paid a visit to SCUT last week to discuss matters on university-enterprise cooperation.

Gao Song introduced to the guests about the history of SCUT and its academic layout, as well as the latest development at the Guangzhou International Campus, which is committed to building “new engineering” subject clusters to promote forefront scientific research and foster students with international vision.

He pointed out that advanced materials and processing engineering, along with the emergence and wide-ranging application of digital and analog computation technology, is arising as a key field for cross-disciplinary research. These are major areas that BASF is developing in Asia, and also where SCUT’s academic strengths show most, which create a solid prospect for them to work together.

Bernd Sachweh, after introducing the development plan and technical teams of BASF, said the two parties share a lot of common views in specific professional fields. He believed that with rich experience his company had gained in transferring technology in the market, it is worth opening further conversations to explore university-enterprise cooperation.

In later discussions, research staff of SCUT’s School of Chemistry and Chemical Engineering and School of Materials Science and Engineering shared their research projects and exchanged views with BASF delegates.

Founded in 1865, BASF Group is known as the largest chemicals producer in the world. The company is expected to implement its plans for a Verbund chemical production site in Zhanjiang, Guangdong province. This planned site will be BASF's largest overseas investment, which is estimated to reach up to 10 billion US dollars upon completion.