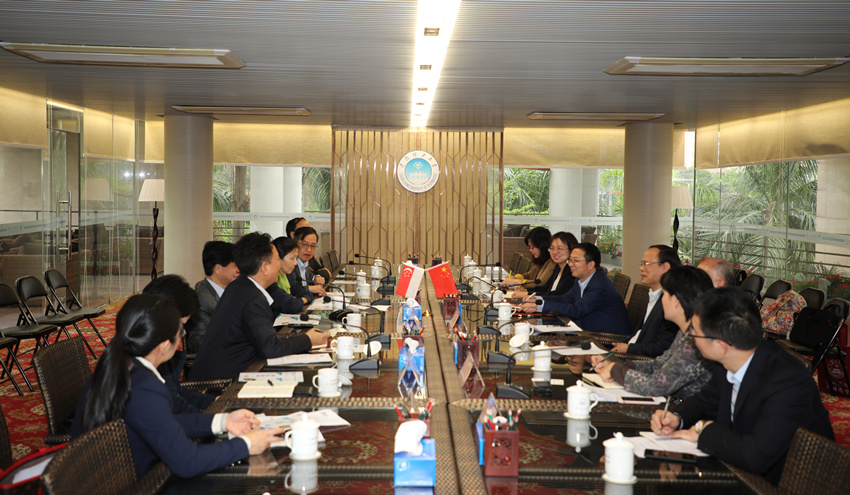 SCUT and Nanyang Technological University (NTU) are committed to forging tighter links, based upon the previous partnership at the Sino-Singapore Joint Research Institute.

A delegation from NTU, led by Ms. Lien Siaou-Sze, Member of NTU Board of Trustees, Professor Lam Khin Yong and Professor Alan Chan, Vice Presidents of NTU, paid a visit to SCUT on March 17.

Gao Song, during the conversation, spoke of the progress that SCUT has made in recent years, in particular regarding the development of the Guangzhou International Campus.

He said the efforts at the Sino-Singapore Joint Research Institute built a solid foundation for the cooperation between SCUT and NTU, which share many similarities and complementation in development strategy and course settings, and he expected to see the two partners constantly exploring the cooperation in more extensive scales.

Qiu Xueqing, in addition, called on the two universities to strengthen communication and coordination in personnel training and construction of academic facilities.

After the meeting, the delegation had a tour at the South China Advanced Institute of Soft Matter Science and Technology, where they exchanged ideas with its research staff.

The Sino-Singapore Joint Research Institute was an international program initiated by SCUT, NTU, and the Sino-Singapore Guangzhou Knowledge City, with its agreement signed on November 7, 2015 during Chinese President Xi Jinping's visit to Singapore.