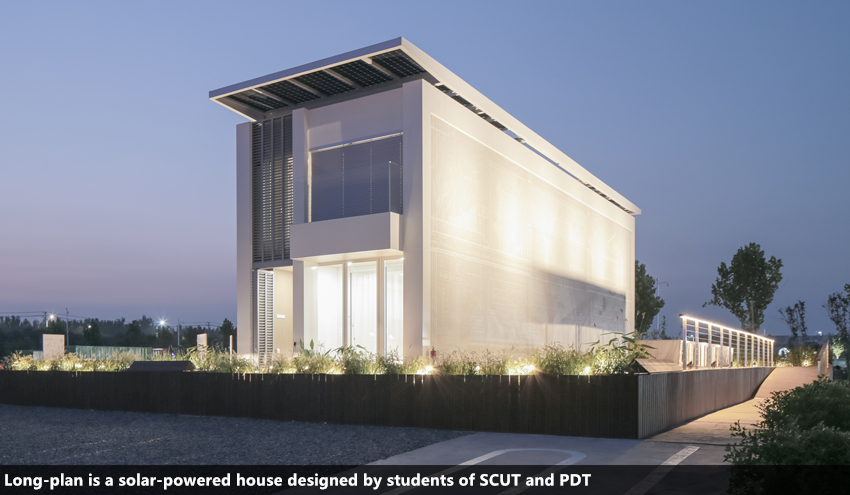 Students of SCUT, along with their teammates of the Polytechnic University of Turin (Politecnico di Torino, PDT), won the first place in general at Solar Decathlon China 2018 (SDC 2018), an international competition that challenges student teams to design and build solar-powered houses.
The competiton, which was concluded on August 17, was co-sponsored by the US Department of Energy and the China National Energy Administration, with 22 teams from 10 countries and regions competing in Dezhou, Shandong Province.
In 2016, SCUT and PDT formed a joint team, SCUT-POLITO, to participate in the event. Team members included top instructors who specialize in urban design, green architecture, and energy saving, as well as students from a dozen of different majors in the two universities.
Their architectural work, which was called Long-plan, focused on resolving urban residential problems, and provided a solution of low-rise, high-density dwelling structure based on bamboo houses. It used developed technology to reduce energy consumption and create a habitable environment, and thus provided vision for urban development and future residential buildings.
Except for taking the top general score in the competition, Long-plan also took a number of single honors, including first place in engineering, the first place in innovation, the second place in market appeal, the second place in architecture, and the fourth place in communications.
Initiated by the United States Department of Energy, Solar Decathlon is an international collegiate competition that challenges student teams to design and build full-size, solar-powered houses. With technologies and innovations from world-leading R&D and design teams, SD aims to integrate solar energy, energy conservation, and architecture design in a new way so as to design and build a comfortable, livable, and sustainable solar house with full functions.