Vice president Wu Daguang warmly received Dr.Lin in the morning and briefed him on the history of XMU and its ongoing effort to upgrade itself into a "Double First-rate" university. Lin said he was impressed with XMU's brilliant history and unique culture. Meanwhile, Lin made a brief introduction to the active roles that Chinese representatives are playing in IMF and expressed his wish to see more young Chinese join the IMF as a way to improve China's global presence. Wu responded with approval that providing excellent students with access to leading international organizations is an important hallmark of a "Double First-rate" school. XMU will renew its commitment to fostering top-tier talent and preparing them for international organizations.

In his speech, Lin pointed out that the major challenges facing the globe today primarily include: sea changes in the field of finance and science, low birth rate, aging of population and widening income gap. In the meantime, he warned about non-economic factors such as natural disasters, corruption and geopolitical risks. Lin also offered his insights regarding where the world will go in the future. He believed the developing world led by China and India has gained growing clout in the global economy over the years from 1980 to 2018, their contributions to the world even outshining those of the developed countries. According to the historical trend, he predicted that global players will become more and more interconnected with one another, with trade, capital and labor force flowing more freely across borders. The ever-developing science and technology will serve as the new powerhouse of the economy, however, we should guard against the side effects along with the development, warned Lin. In the coming years, he indicated, aging will remain the major obstacle to economic growth across the world, which is especially the case for the developing countries. 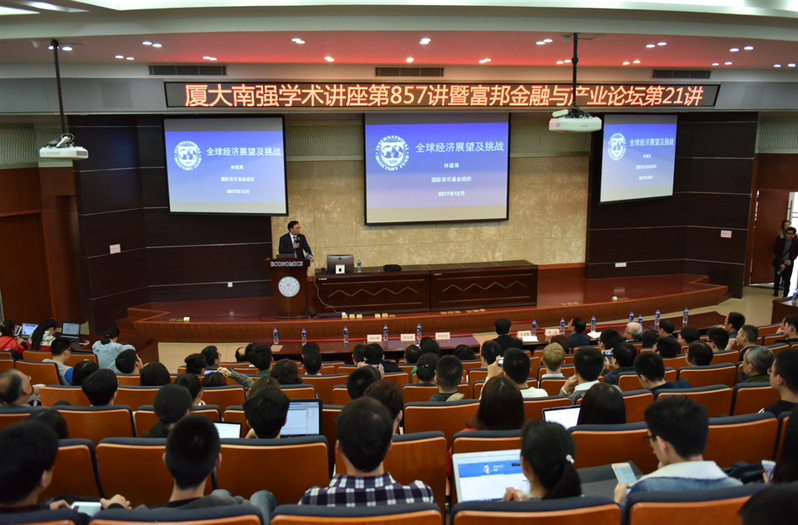 The ensuing interactive session brought the lecture to the climax as Lin fielded various questions from students with keen insights. He gave explanation to inflation and trade protectionism and shared his thoughts on the future monetary policy at home and the prospects of capital liberalization. His enlightening views and characteristic wit kindled the vibes and engaged a capacity audience.