At 8:10, September 11, the school’s opening ceremony of LNNU was held respectively on the North Campus playground in Huanghe Road Campus and the Western Hill Campus playground. LNNU leaders such as Qu Qingbiao, Han Zenglin, Liu Qun, Liu Xiangjun, Li Wei, Li Qingwei and Li Hong presented the ceremony, along with many administration leaders and the deputy secretaries, Youth League Secretaries, and the political and ideological instructors from other departments. Zhu Chengli, Dean of the General Administration Office, presided over this grand ceremony. 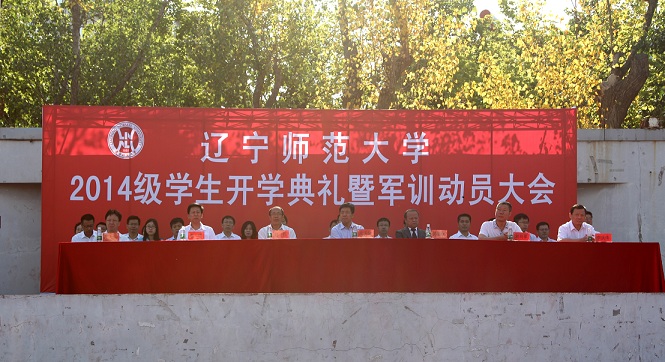 LNNU President Han Zenglin gave an endearing speech to the freshmen of 2014:“you are standing at a new start of life, facing infinite future. So you have to be learned and cherishing dreams and becoming specialized and learned dream pursuers. You should be confident, practical, healthy and optimistic. Only living with beliefs and positive energy can our students enjoy and disseminate positive energy!”
As teacher representatives, Professor Zhu Ningbo, the Dean of the School of Education, and Professor Shi Zhuqing, the Dean of the School of Film & Art expressed their hope and sincere blessings to the freshmen of 2014.
Postgraduate student representatives of 2013, Ximan from the School of Politics and Administration, and Li Yang from the School of Historical Culture and Tourism also gave speeches in the ceremony. Freshmen representatives, Han Jinying from the School of Physics and Electronic Technology, and Zhang Linwan from the School of Chinese Language and Literature gave speeches, too.
After the opening ceremony, LNNU Security Department chaired the military training meeting of all the undergraduate freshmen. Professor Liu Qun, the Deputy Secretary of CPC in LNNU, gave a speech serving as a military training mobilization.