CUCAS News > School News > OUC Signs a Memorandum of Understanding with the University of Bergen, Norway

OUC Signs a Memorandum of Understanding with the University of Bergen, Norway 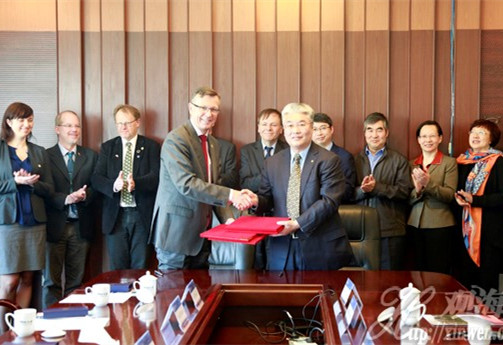 On April 19, President Dag Rune Olsen of the University of Bergen (UiB) led a delegation to Ocean University of China (OUC), which was met by President Yu Zhigang on Laoshan campus. The two sides had in-depth discussions on the collaboration between the two universities and signed an MoU of cooperation.

President Yu extended a warm welcome to the guests and presented an overview of OUC to them. He then pointed out that UiB does not only have unique strengths in the environmental and life sciences, but is also taking the lead in the humanities and social sciences. He hoped that the two universities could start their collaboration with marine science, particularly marine molecular biology, and gradually expand the area of cooperation to the humanities and social sciences, so that each side could complement the other’s advantages and push for shared improvements.

President Olsen congratulated OUC on its being selected as a university in the A Category of China’s plan for building world-class universities, and introduced UiB to the President. He explained that UiB attaches great importance to scientific marine research and has devised the strategy for 2016-2022 “Ocean, Life, Society”. He expressed his belief that developing cooperative relations with OUC is highly meaningful for UiB.

President Yu commended UiB’s strategy for 2016-2022 “Ocean, Life, Society” and said that it corresponds well with the development strategy of OUC and has a huge potential to inform the cooperation between the two institutions.

The two sides also exchanged ideas on the building of a new joint research center in marine molecular biology at OUC, based on OUC’s Key Laboratory of Marine Genetics and Breeding and UiB’s Sars International Centre for Marine Molecular Biology.

After the discussion, President Yu and President Olsen signed the MoU of cooperation between the two institutions and the MoU for the establishment of the joint center in marine molecular biology. 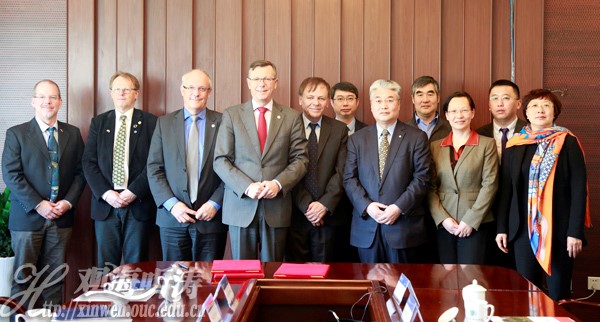