From May 25 to 26, Yu Zhigang, President of Ocean University of China, led a delegation to visit Pukyong National University (South Korea). The two universities had in-depth discussions about talent cultivation and scientific research, aiming to further their cooperation. Professors and staff from the College of Foreign Languages, the Academic Affairs Office and the International Office joined the visit. 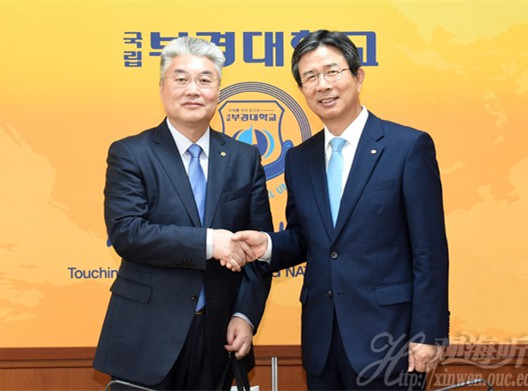 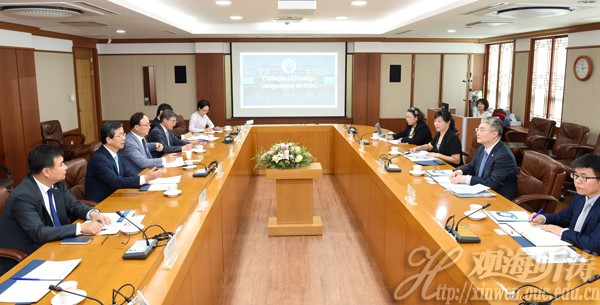 The delegation and Pukyong National University during their meeting

President Kim Young-Seup congratulated OUC on its achievements in the construction of the “Dong Fang Hong 3”, as well as on the construction of OUC’s new campus on the west coast of Qingdao, the building of high-level talent teams, and of their place on the list of China’s initiative for world-class universities. He also reviewed his two visits to OUC in 2017 and explained that there are many similarities between the two institutions including their philosophy, development history and natural environment. The direct flight from Busan to Qingdao has shortened the geographic distance, and President Kim Young-Seup expressed the hope that this visit could promote their bilateral cooperation and build closer partnerships.

President Yu Zhigang thanked the university for its warm welcome. He explained that Pukyong National University is a very important partner for OUC, that both sides are founding members of the International Alliance of Marine Related Institutions (IAMRI), and that the establishment of a strategic partnership between the two parties has profound significance. OUC will actively participate in the construction of the World Fisheries University, and will continue to play an important role in the multilateral cooperation with IAMRI universities.

After the meeting, professors from the College of Humanities and Social Sciences and from the College of Environmental and Marine Sciences introduced the development of their disciplines. Professor Lee Sang-Go introduced the progress of the construction of the Food and Agriculture Organization’s World Fisheries University. Associate Professor Yin Wei from OUC introduced its disciplinary development, talent training and the international talent demands of the College of Foreign Languages and the College of Liberal Arts, Journalism and Communication. The participants had a full exchange of opinions and both parties agreed to establish a cooperative development center to form continuous cooperation and to further promote educational exchanges in the areas of marine science and technology and marine history and culture, and in the construction of the World Fisheries University.

During the visit, the delegation visited the Korea National Maritime Museum where they were warmly received by Professor Son Jae Hak, the chief curator. The two sides conducted discussions on marine history and culture. 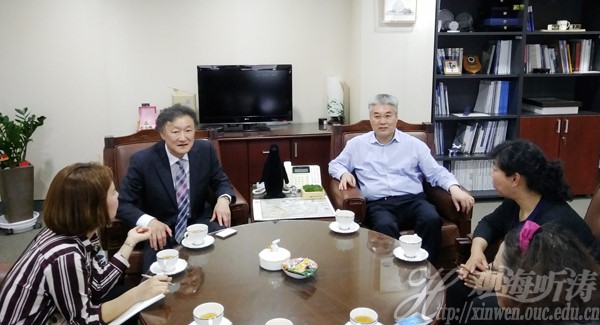