From May 22 to 26, Wang Jianmin, Vice President for Finance of Ocean University of China (OUC), led a delegation to Saint-Petersburg State University (SPbU). He participated in the sixth Forum on China-Nordic Arctic Research, and visited the Norwegian Polar Institute, University of Tromso (UiT).

On May 22, the delegation visited St. Petersburg State University and was warmly received by Sergey Andryushin, Deputy Rector for Foreign Affairs, Irina N. Novika, Dean of the School of International Relations, and professors from marine related disciplines.

Wang Jianmin introduced OUC as a comprehensive university with outstanding marine characteristics, which has world-renowned outstanding scholars in marine related research, including polar research, which has produced impressive achievements. The two universities launched the “Forum on China-Russia Arctic Cooperation” in 2012, which has been held six times so far and continues to attract increasing numbers of scholars and to promote arctic research. By signing a cooperative Memorandum of Understanding (MoU), he hoped that the two parties could prompt cooperation and strengthen educational exchanges. The SPbU scholars who participated in the forum made speeches and looking forward to more participation and cooperation between interdisciplinary scholars.

Song Wenhong, Director of the International Office, introduced OUC’s international cooperation and exchanges, the developments of the International Alliance of Marine Related Institutions (IAMRI), and the needs for marine-related talent. Liu Huirong, Dean of the College of Law and Director of the Polar Research Center, introduced the college’s talent training program, disciplines and research. The two universities praised the cooperation highly and they reached consensus on expanding potential cooperation and on strengthening educational exchanges in polar-related disciplines. The two parties also exchanged their views on the seventh Forum on China-Russia Arctic Cooperation which will be held at OUC in September. After the meeting, Deputy Rector Sergey Andryushin and Vice President Wang Jianmin signed a cooperation agreement.

The delegation was also invited to visit SPbU’s History Museum and held discussions with the faculty and students from the School of International Relations. 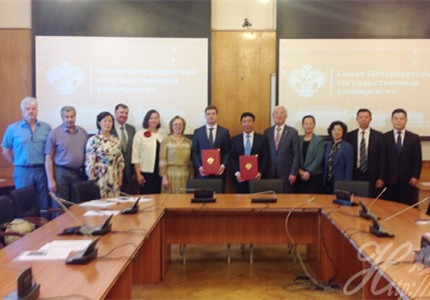 From May 24 to 26, the delegation visited the Norwegian Polar Institute at the University of Tromso, and participated in the sixth Forum on China-Northern Europe Arctic Research Cooperation.

Ole Arve Misund, Director of the Norwegian Polar Institute, and Nalan Koc, Research Director met with the delegation. Wang Jianmin spoke highly about the sixth Forum. He said that he had just met Ole Arve Misund a month ago in Qingdao. Although there is a large distance in geography, there is no distance in mind. Cooperation between professors of the two institutions had deepened their relationship. He gave a great expectation on two sides’ future cooperation. 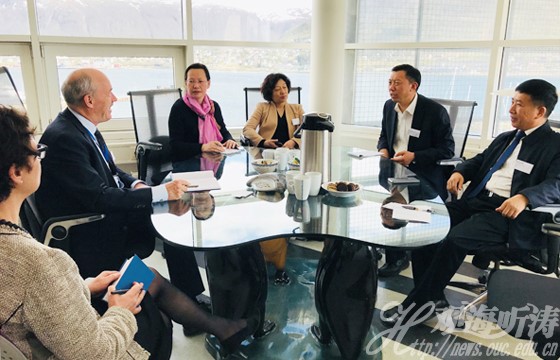 Ole Misund, Director of the Norwegian Polar Institute (second from left) met with the delegation

The delegation was also invited to visit the University of Tromso, and the two universities exchanged their views on their research interests. 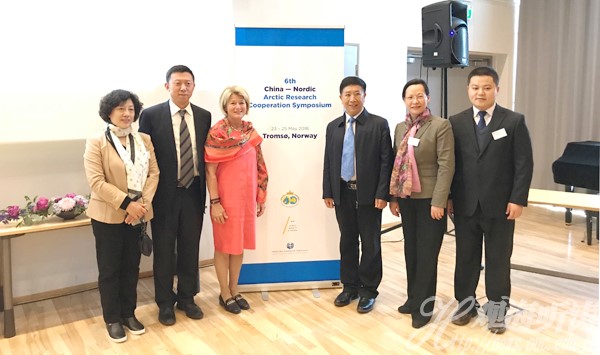 Photo of the delegation and Professor Anne Husebekk, President of the University of Tromso

More than 50 representatives from nearly ten countries participated in the 6th Forum on China-Northern Europe Arctic Research Cooperation, entitled Integrated Ocean Management in the Arctic. Guo Peiqing, a professor at OUC’s College of Law and the Deputy Director of the Polar Research Center, gave a keynote speech on The Latest Developments and Trends of Arctic High Seas’ Fisheries Management.

Through this visit, OUC has established a cooperative relationship with Saint-Petersburg State University and has reached an important consensus on the expansion of cooperation in marine-related scientific education. At the same time, through visits to the Norwegian Polar Institute and the University of Tromso, we have developed a deeper understanding of Tromso, an arctic gateway city, and its marine related institutions. We have also exchanged in-depth views on polar-related cooperation with our partners, thus achieving the expected results of this visit.