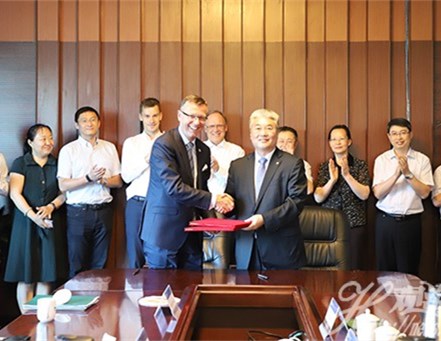 On July 3, 2018, President Yu Zhigang of Ocean University of China (OUC) met with Rector Dag Rune Olsen of the University of Bergen (Norway). The two sides had extensive exchanges on the establishment of the Sars-Fang Research Center for Marine Molecular Biology which culminated in signing a cooperative agreement.

President Yu extended a warm welcome to Rector Olsen, who was visiting OUC just two months after his last visit which, President Yu said showed the University of Bergen’s commitment to the cooperation between the two universities, especially in promoting cooperation in the field of marine molecular biology. President Yu expressed his firm belief that with the joint efforts of both parties the Sars-Fang Research Center for Marine Molecular Biology will become a world-class research center for marine molecular biology. He also expressed his expectations about expanding cooperation in the fields of humanities, social sciences and environment and earth sciences, and in conducting student exchanges.

Rector Olsen said that he was very pleased to meet with President Yu Zhigang again after two months. Since the two universities reached an intention on the joint construction of the international research center for marine molecular biology in April, personnel on both sides have communicated effectively and reached a foundational agreement on the center’s organizational structure, management mechanism and on the employment of personnel, showing high work efficiency, for which Rector Olsen expressed his admiration.

Following this, the two sides jointly reviewed the cooperation framework agreement and determined the members of the preparatory committee and tasks. President Yu Zhigang and Rector Olsen signed the cooperation agreement for the joint establishment of the Sars-Fang Research Center for Marine Molecular Biology.” 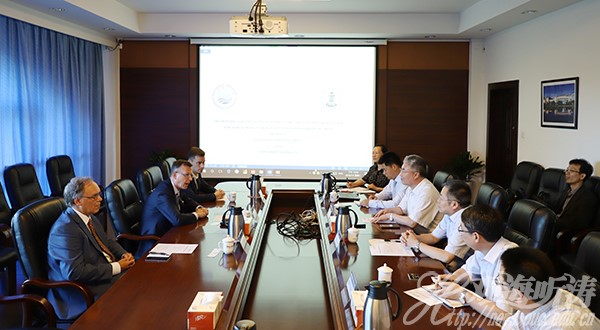