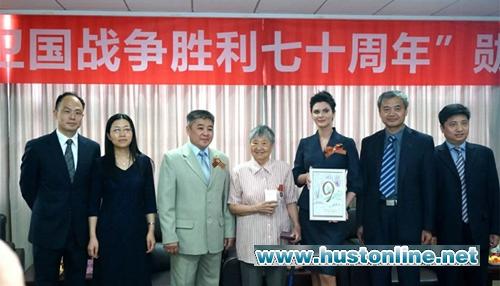 In the afternoon of May 6th,on behalf of the Russian President Putin, Russian Military, Russian Ministry of Defense and Embassy of Russian Federation in China, a group led by Mr.Damdinov Bazar, First Secretary of the Embassy of Russian Federation in China awarded the commemorative medallion of the 70th anniversary of the Great Patriotic War to Cai Zhuan, a woman who made her contribution to the Great Patriotic War, U.S.S.R.

Cai Zhuan was a professor in the Department of Neurology Internal Medicine of Tongji Hospital before her retirement. Born in 1928, she was the daughter of Cai Hesen, one of the early leaders of Chinese Communist Party. In 1938, she went to  Ivanovo International Children’s School and lived there. During the Great Patrotic War from 1941 to 1945, she, as a student, actively participated in laboring at the rear to support the frontier. In 1946, she was admitted to the medical department of the Moscow Stalin national second medical school exempt from the examination. In 1953 he graduated and returned to China. After that ,she worked in Beijing and then Wuhan as a respectable and prominent intellectual in the medical frontier. Since 1995, she has been awarded the Great Patriotic War Medallion from Russia three times. This year, it’s the fourth time that she has been awarded the medallion.

It’s said that the the commemorative medallion of the 70th anniversary of the Great Patriotic War is to be awarded to people in the world who made their contributions to the war. That Russia awarded this medallion to relevant Chinese people marks an important event of the Celebration of the 70th anniversary of the victory of World War II co-launched by Russia and China.

In the medallion awarding ceremony, Mr.Damdinov Bazar pinned the commemorative medallion on the chest of Cai Zhuan in person. Moreover, Mrs Cai received a special souvenir-Memorial Day, a painting drawn by the daughter of  Mr.Damdinov Bazar. The olive branch and medallion ribbon in the painting formed a “59” structure standing for May 9th, the victory day of the Great Patriotic War and symbolizing peace and eternal commemoration.

Mr.Damdinov Bazar said:” although there are fewer and fewer old Chinese soldiers in the war still alive, nevertheless, our country will always bear their names in mind and pay tribute to their contributions to the war.”

Cai Zhuan communicated with him in fluent Russian just like old acquaintances. “ I shared those tough experiences in the war with you, which tempered me and became my unforgettable life experiences.” she said.