From 13th-19th June 2018, the International Center for the Study of Ancient Text Cultures (Renmin University of China) hosted the Third Bi-Annual Workshop for Ph.D. students and junior scholars under the theme of “Ancient Historiography in Comparison” at Renmin University of China in Beijing. Four distinguished scholars from the fields of ancient Chinese, Greek and Roman, and Jewish and Biblical Historiography presented day-long lectures in English to more than forty advanced graduate students and junior scholars from leading universities in China and around the globe. Hosting successful event like this witnesses the Center’s belief that to put ancient Chinese civilization in dialogue with global antiquity is the way to promote China in today’s world.

The workshop began in the evening of June 13th with a welcome and introductory address by the Director of the Center, Prof. Martin Kern, the Greg and Joanna Zeluck Professor in Asian Studies and Chair of the Department of East Asian Studies at Princeton University. To frame the week-long workshop, Kern asked four broad questions: What do we mean by “history”? What distinguishes a “historian” in antiquity? What do we mean by “historiography” and what are its conceptual boundaries within different ancient civilizations? And finally, what do we mean by “comparative study” — the very activity that defines the Center at Renmin University? By exploring these questions within the context of particular traditions and drawing on the concepts of “cultural memory” (Jan Assmann), “imagined communities” (Benedict Anderson), “invented traditions” (Eric Hobsbawm), and the narrative conditions of historiography (Hayden White), Kern noted that all history is constructed by and for particular communities in order to generate meaning and identity for the present, and that “history” is never a simple account of facts: it is always contested and continuously changing. Kern further explored the distinction between “scribe” and “historian,” showing how some traditions emphasize the individual persona of the “historian” while others rest the authority of historical knowledge with “scribes,” that is, institutional functionaries of writing. From here, Kern explored different styles of historiography, contrasting the voices of Greek and Roman historians with those of commentators, compilers and their imagined communities in China before the empire. Finally, Kern problematized the practice of “comparison” itself: while comparative perspectives are indispensable for the understanding of any ancient civilization, the act of comparing itself does not is simply match similar phenomena from different places. Instead, every comparison must first construct and hence mediate these phenomena as being similar in the first place. In Kern’s analysis, our access to antiquity is thus doubly refracted: by the particular choices of both the ancient historians and their modern scholars.

In his June 14 lecture, Yuri Pines discussed the evolution of ancient Chinese historiography from the Shang (商ca. 1600-ca. 1046 BCE) and Western Zhou (西周ca. 1046-771 BCE) dynasty down to the times of Sima Qian (司马迁ca. 145-90 BCE). By revisiting a broad array of historiographic and quasi-historiographic texts as well as related cultural practices, Pines analyzed questions related to the production and circulation of historical knowledge at different stages of formation of Chinese historiographic tradition. Pines began his lecture with the earliest examples of recording the past in China embodied by oracle bones and bronze inscriptions, with emphasis on their ritual and commemorative functions which separated them from historical accounts in a stricter sense. He then discussed the Spring and Autumn period (春秋时期ca. 770-453 BCE) as an age witnessing the proliferation of scribal practices in the competing political entities that comprised the Zhou world. Pines argued that the Spring and Autumn Annals (《春秋》Chunqiu) should be understood as ritual texts, possibly addressed to the ancestors, rather than historical text per se. He then analyzed the differences between the sacral reading of the Annals in the Gongyang commentarial tradition (《公羊传》) and the more profane and historical reading proposed in the Zuo Commentary (《左传》Zuo zhuan), in which Pines suggested that their primary sources were local histories prepared by scribal offices of the competing states. Thus, Zuo zhuan contained the factual skeleton based on meticulous records of major events, in addition to a variety of historical anecdotes, speeches, predictions. The Warring States period (453-221 BCE), Pines further argued, marked another stage of historiographic knowledge that was primarily performed by competing philosophers, whose discourses were less concerned with historical accuracy. It is against this backdrop that we can evaluate the contribution of the great Western Han historian Sima Qian and his Records of the Historian (《史记》Shiji). The Shiji amalgamated previous historiographic traditions, creating a work that was not only literary engaging and intellectually appealing, but also highly informative. This success—in addition to Sima Qian’s invention of a new concept of authorship—explains the lasting appeal of Shiji and their enormous impact on subsequent tradition of history writing.

On June 15th, Prof. Nino Luraghi, the Wykeham Professor of Ancient History at Oxford University, delivered three lectures on the Greek historians Herodotus, Thucydides (both 5th century BCE) and Polybius (2nd century BCE). Luraghi began by describing the sophisticated structure and diverse subject-matter of Herodotus’ Histories, which present themselves as a history of the wars between the Greeks and the Persian Achaemenid Empire (490-478 BCE), but in fact cover a much longer period of time, dealing with the ethnography of all the lands conquered by the Persians from the middle of the sixth century BCE onwards, such as Egypt, Scythia, Lydia and others. Luraghi insisted especially on Herodotus’ reliance on oral tradition, a feature that Herodotus shared with his immediate successor Thucydides, whose history of the was between Athens and Sparta (431-404 BCE) had a much narrower thematic scope, concentrating exclusively on political and military events to the exclusion of social and cultural aspects, thereby opening the way to the abiding interest for war of Greek and Roman historiography. With his powerful rhetoric evoking reliability and objectivity and his abundant use of speeches, presented as word-by-word utterances of the historical actors, Thucydides established himself as a model for successive generations of historians. Later Greek historiography, while still relying predominantly on oral information, developed a stronger interest and critical methods for the use of documents. Polybius, who narrated the Roman expansion from the end of the third century BCE to the middle of the second, inherited this methodology, but at the same time carried further Thucydides’ concern for history as a source of teachings for future politicians, by stressing the necessity of political experience in order to be a good historian. His work, which survives only partially, was extremely influential, more than Herodotus and Thucydides, until the nineteenth century.

On June 16th, Mark S. Smith, Helena Professor of Old Testament Literature and Exegesis at Princeton Theological Seminary, worked specifically to introduce the biblical books of Genesis and Judges and broadly to situate such ancient Israelite historiography of the Hebrew Bible in the context of the historical writings of Mesopotamia, Egypt and the Levant. He balanced the conceptual and textual nuances characteristic of his own scholarly career, while simultaneously demonstrating the possibility for fruitful interdisciplinary conversations among scholars of the ancient world. Smith began with an admonition to consider the definitional constraints of history, history-writing, and historiography—and whether such terms were always applicable to the specific texts and cultures being studied. From these broad reflections, Smith turned to close readings of the composition, structure, and themes of the books of Genesis and Judges as case studies for historiography in the Hebrew Bible. Drawing on terminology from Nino Luraghi’s work on the Greek historian Herodotus, Smith described Genesis as a “map of knowledge” charting later Israelite relations with their neighbors as stories of familial conflict. In Judges, Smith explored issues of structure and the interweaving of older stories or collections of stories with a more religious framework in the form in which we have the text. Smith further engaged in detailed discussions with workshop participants comparing the biblical materials to their own respective fields of study. In this and his careful analysis throughout, Smith modeled how interdisciplinary and comparative work on the ancient world ought to proceed in the future: with a minimum of insular jargon and rhetoric and a maximum of critical scholarly engagement at both a textual and conceptual level.

The final day of lectures featured Professor LU Yang, a leading scholar of Buddhism and the history of Tang from Peking University. His lecture is on “biography” as a historiographical form during what is often referred to as China’s medieval period (3rd-9th c.), focusing on two types of writings, biographies of Buddhist monks and entombed epitaphs. LU’s introduction to the early history of biographical writings explored why accounts of individuals rose to prominence in the wake of Sima Qian’s Shiji. He argues that biographies allow for not only the narration of the same event from different participants’ perspectives, but also the holistic representation of an individual. As history writing as a scholarly practice grew increasingly independent from classical learning, suitable evaluation of historical subjects became a hallmark of historians’ craft, underscoring the importance of biographies. Professor LU used the earliest accounts of Kumārajīva (鸠摩罗什，d. 413), a major translator of Buddhist texts as an example for his argument. By a close reading of the extant versions he identified narrative devices within, such as the remarkably extensive account of Kumārajīva’s mother, and pointed out that the portrayal of Kumārajīva as wise in understanding but lacked moral perseverance and effectiveness, functioned as a foil to the patriarchs who promulgated Buddhism not only through learning, but also through practice. In the afternoon session, LU devoted his lecture on entombed epitaphs (墓志铭mu zhi ming) as biographical accounts. It is only in recent scholarship that the value of epitaphs as historical sources began to be recognized, especially as counter-voices to official histories. LU explained that during the medieval period, the biographical preface grew increasingly substantial, overshadowing the elegy that was originally the main content of this genre.

On the fifth day, Ph.D. students and junior scholars were divided in small groups to present their research and academic interest, and the four instructors and their peers offered comments and professional advice. The workshop concluded with another plenary session on Saturday where the four professors recalled the important themes of the week and recognized both the smooth organization by Renmin University and the wonderful contributions of the students throughout the week. The next bi-annual workshop held by the Center will focus on ancient Egyptian and Chinese manuscript culture texts, writing systems, genres, etc., from January 14-18, 2019. 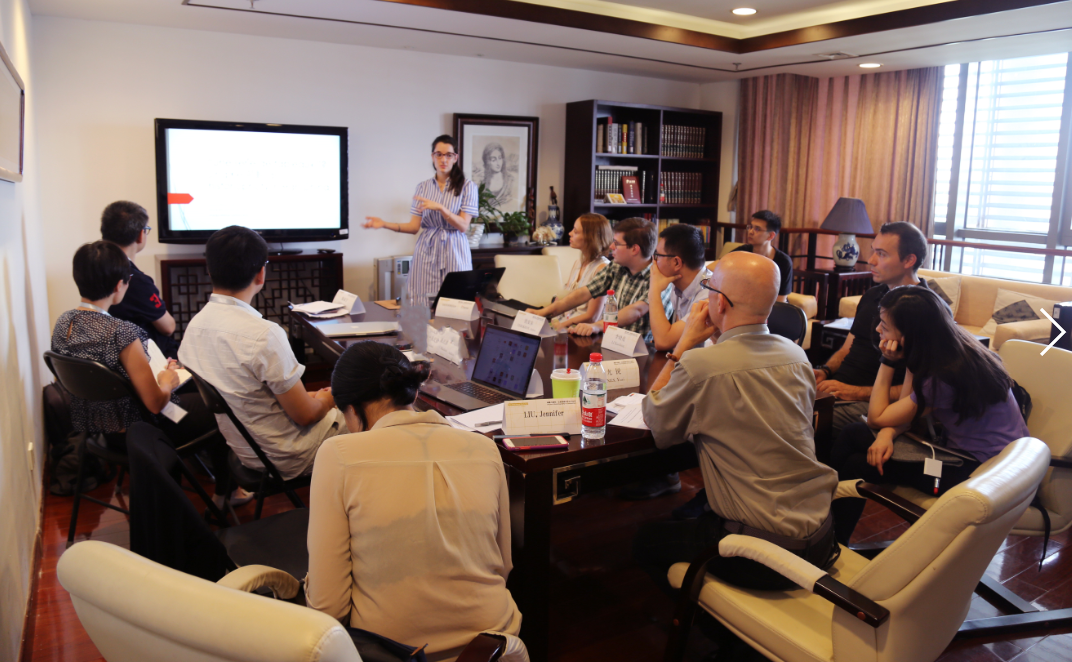