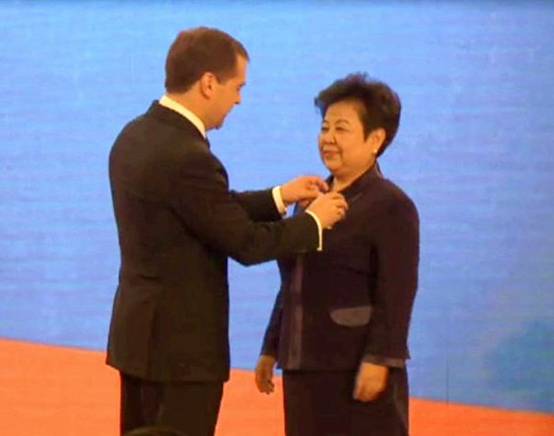 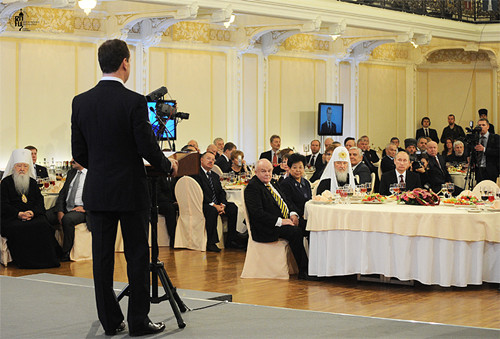 On November 4, 2011, Russian Federation President Dmitri Medvedev awarded the Friendship Medal to CUPL Professor Huang Daoxiu in recognition of Professor Huang’s outstanding contribution to exchanges between China and Russia in the field of science of law. The medal ceremony took place in the city of Novgorod, located adjacent to the Volga River.

During the ceremony, Professor Huang Daoxiu extended her sincere thanks for the special recognition. She mentioned that it was an honor to devote herself to culture, science, and law exchanges between China and Russia during her fifty years' work. Professor Huang also told President Medvedev and attendees of her pride to help build a bridge of friendship between China and Russia.

Other attendees included Russian Federation Prime Minister Vladimir Putin, Russian Orthodox Church Patriarch Metropolitan Kirill, and over one hundred governmental officials. President Medvedev and Prime Minister Putin hosted a dinner for Professor Huang Daoxiu, Mr. Janik, and other distinguished guests. Prime Minister Putin congratulated Professor Huang Daoxiu for the special award and expressed his thanks for her contribution to the cultural exchanges between China and Russia. CCTV correspondents in Russia covered the event.