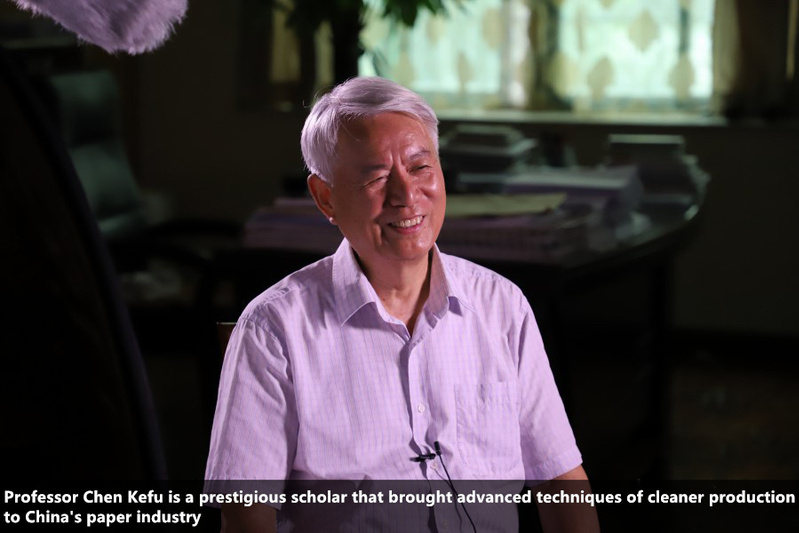 Professor Chen Kefu of SCUT was recognized as one of the ten leading scientists that made significant contributions to China's paper industry across the last four decades, according to Chinapaper.net, a highly influential nationwide online community of paper industry.

The website recently published an article to mark the 40-year milestone since China started the "reform and opening up" in 1978. During this period, a great number of scientists and engineers used their intelligence to make the Chinese paper industry develop and thrive.

Among them, Chen Kefu, a professor at the School of Light Industry and Engineering of SCUT, was China's first specialist in pulp and paper science that was elected to the Chinese Academy of Engineering.

Many of his research projects focused on developing and promoting new technology to address issues of energy saving and pollution control, which are tightly linked with the particular condition of resource distribution and environment in China. These works included his unremitting efforts in developing high-consistency pulping techniques to replace low-consistency pulping techniques.

With more than 40 patented inventions, his team has transferred most of their research works into real uses. For instance, an advanced type of bleaching system based on technology developed by the team has been delivered for installation in paper factories to facilitate cleaner production.

Chen Kefu is also known for his endeavor as a university teacher, who has so far trained over 60 PhD graduates that all became extraordinary specialists in pulp and paper science.

"I believe the future of paper industry is not just to make papers for printing, packaging, or household purposes," he said. "It can be introduced into other fields and becomes an indispensable part in them. It will play a key role in high-tech industries of China."

After graduating from Fudan University in 1966, Chen Kefu used to teach in Fudan University and Tianjin University, and then joined SCUT in 1992. He was one of the key persons who built the State Key Laboratory of Pulp and Paper Engineering at SCUT, and now serves as Chief Scientist and Director of the National Technological Innovation Center of Plant Resources Chemistry and Chemical Engineering.