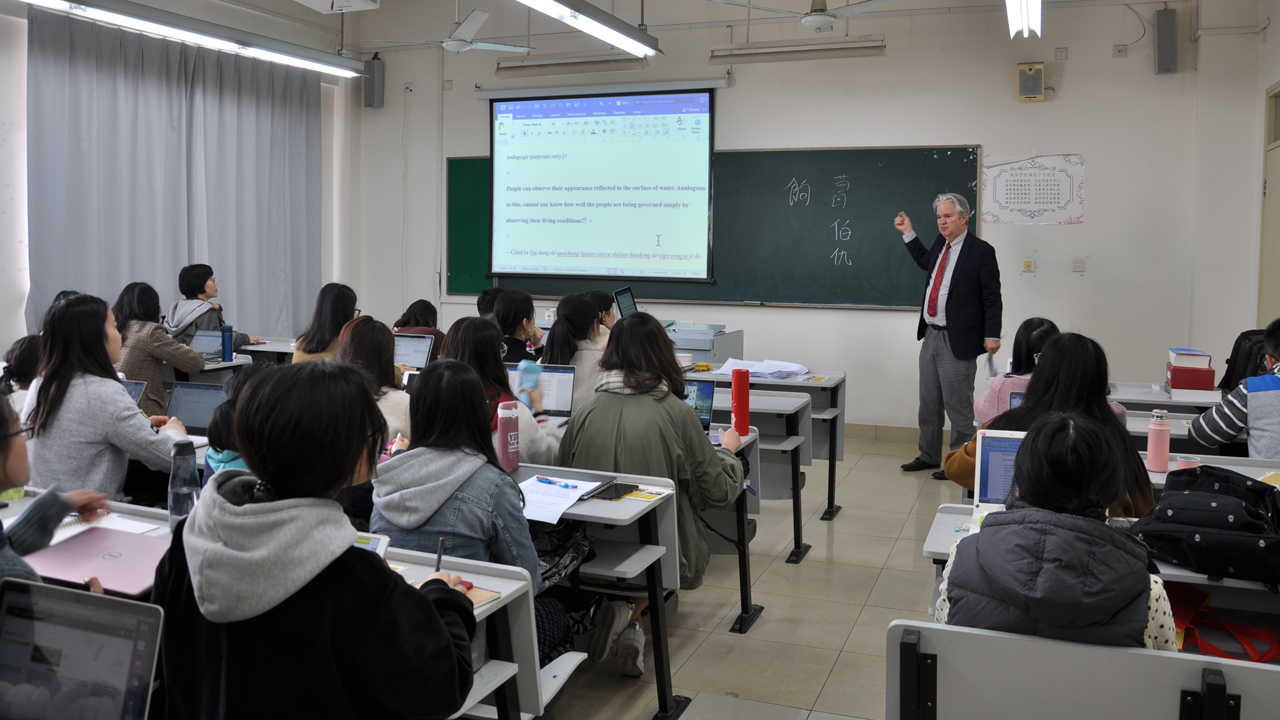 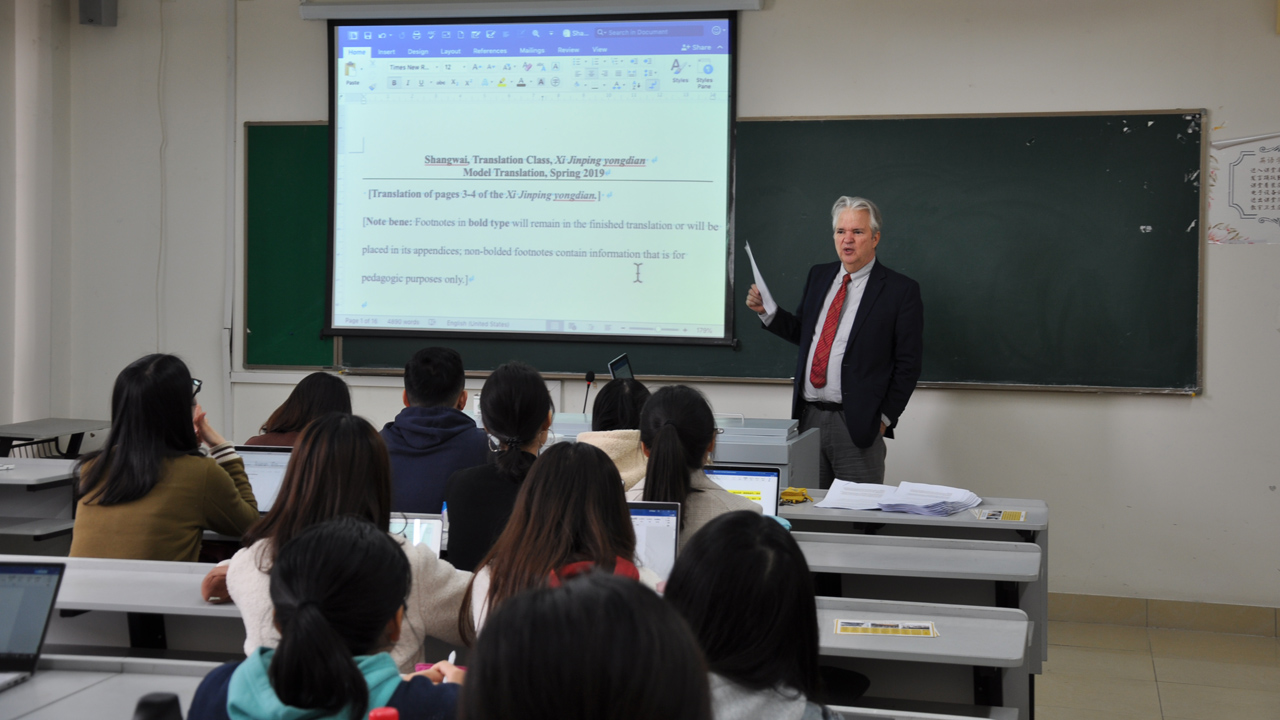 On April 10th, at the invitation of the Translation Association of the School of English Studies (SES) at SISU, Curtis Evans held a workshop entitled “Exegetical Translation as a Tool for Understanding Classical Chinese and Texts on Traditional Chinese Culture: a Sinological Perspective”. The workshop is one of the inaugurating events of the association.

Humbly describing himself as “a student of translation and Chinese history and culture”, Curtis is well-versed in Sinology, graduating from the department of History of Harvard University. He has opened a variety of courses on translation, writing and culture at the SES. He is also the proofreader of the translation of the first volume of Xi Jinping Yongdian or Xi Jinping’s Citations from the Chinese Classics, a project currently undertaken by the SES. Renshishuijianxing, Shiminzhizhifou, the text used in the workshop, was in fact extracted from Xi Jinping Yongdian.

Before the workshop, Curtis asked the participating students to prepare their own versions.The key line, which was translated into “People can observe their appearance reflected in the surface of water. Analogous to this, cannot one know how well the people are being governed simply by observing their living conditions?”, was quoted by Xi at a meeting on public service. The sentences first appeared in Yin Benji Chapter of Shiji (also known as Records of the Grand History). It is difficult for modern Chinese readers to fully understand the ancient text, even with some knowledge about the history and the figures. However, it is a translator’s job to understand a text fully. To help the participants reach that level of understanding, Curtis prepared a 16-page note explaining both the original ancient Chinese text and its half-page long reference, which was provided by the book. Bit by bit, the gap between the students and the text was narrowed.

The highlight of the workshop was Curtis’s demonstration of a sinological approach to translating Chinese classics. While jargons like “exegesis” and “sinology” seemed intimidating, the product of exegetical translation and the using of the sinological approach is reader-friendly. This is because the translation is based on a complete understanding of the source material. A particularly noteworthy point is that the approach pays close attention to the writing details, especially the stylingof the text. This is something neglected in the past as well as current publication of outbound translations of Chinese classics.

The 90-minute worshop was highly informative and rewarding. The students were able to see in the translators’ and the proofreaders’ smallest choices, from paragraphing to punctuation, their professionalism and attention to detail. Curtis also touched upon some recurrent topics in translation training: when to add, when to omit, how to balance between the preservation of the content and the creation of the form, and how to deal with the differences between parataxis (Chinese) and hypotaxis (English). A native speaker of English and experienced translator, Curtis offered the students useful insight into the practice of C-E translation. For instance, his introduction of the Flesch-Kincaid readability test inspired those who had problems determing the difficulty of their language of translation. The interaction between Curtis and the participants was friendly and vigorous.

Under the support of SES teachers, the Translation Assoication is aimed to prepare its members for more advanced translation training and eventually becoming professionals with the ability to think critically. The main components of the activities are translation projects, competition guidance, themed lectures, workshops and publication.