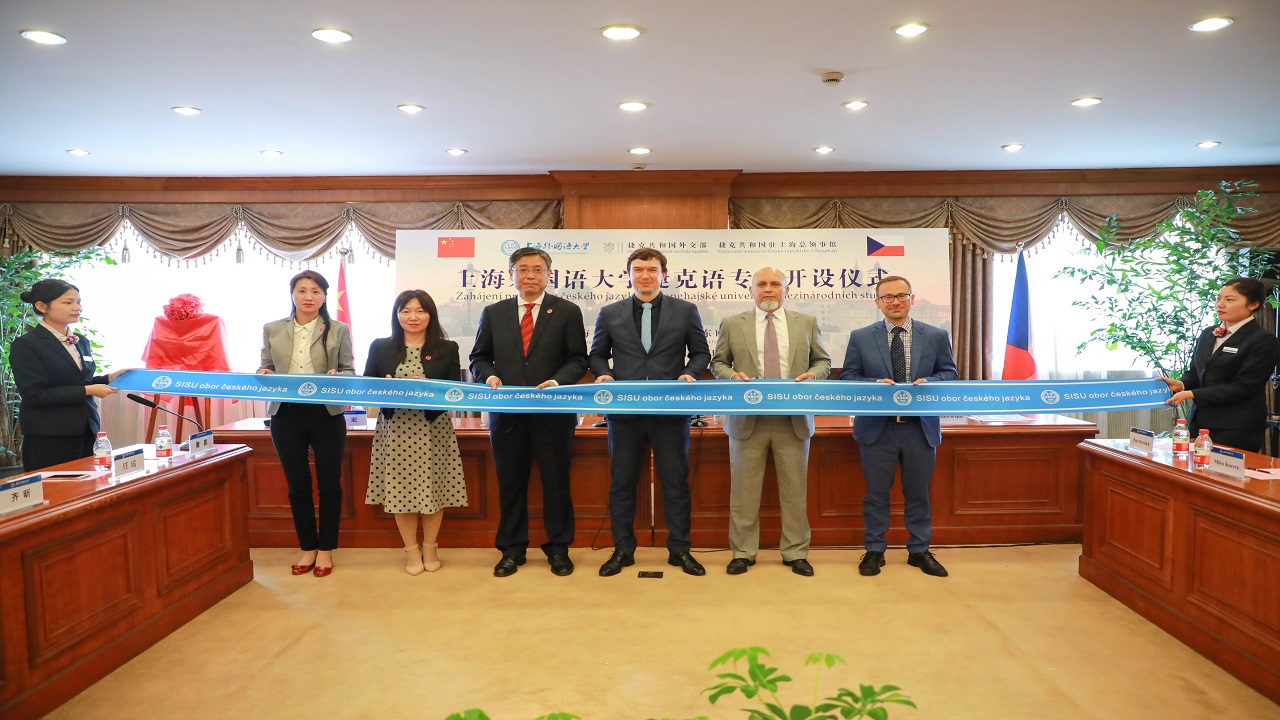 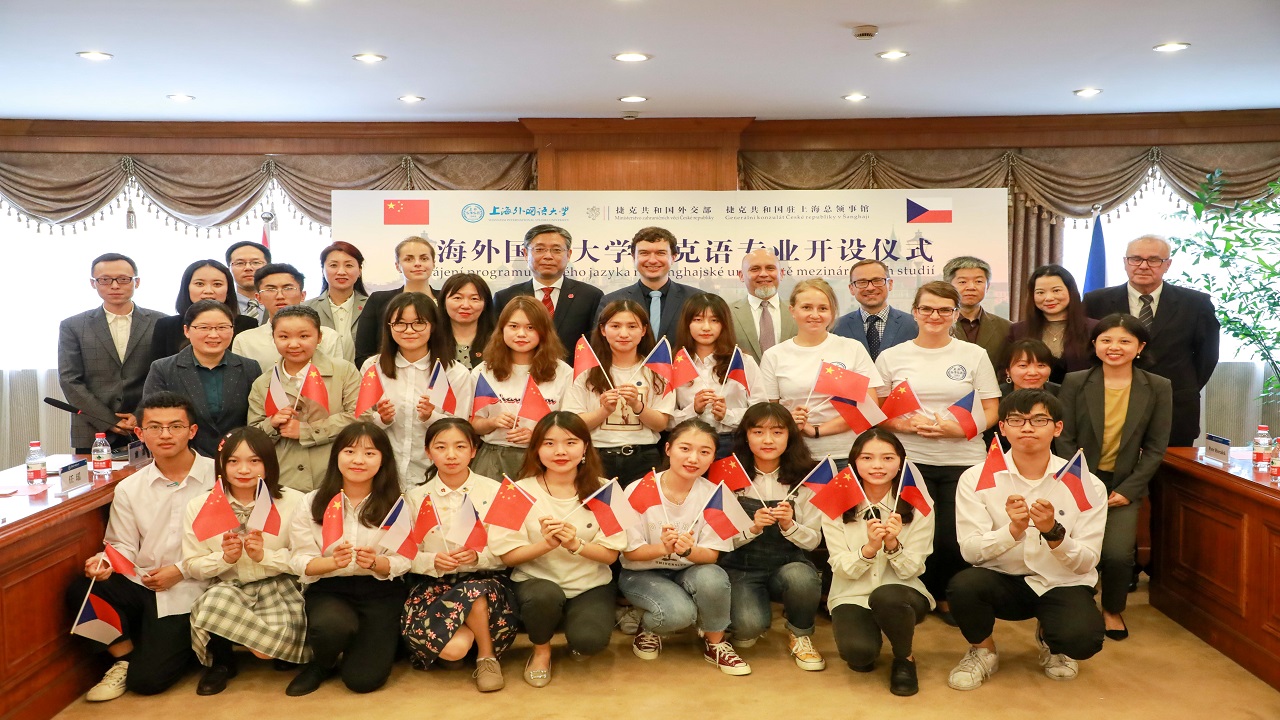 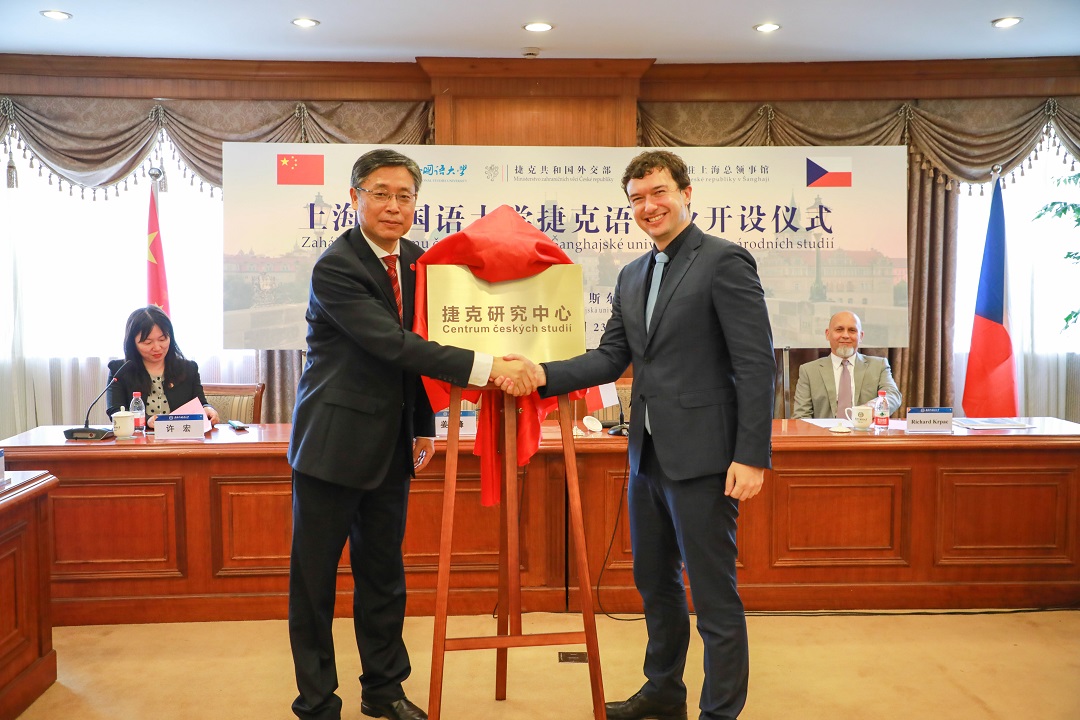 Before the ceremony, Jiang met guests from the Czech side and had an in-depth conversation with Lukas Kaucky on China-Czech cooperation and communication in education and culture. He introduced the degree program to the guests, concentrating on three areas: the outline of the program, the enrollment requirements and the cultivation mode. He also conveyed his gratitude to the Czech Republic, especially the Consulate General in Shanghai, for their assistance in establishing the program.

At the ceremony, Jiang extended a warm welcome to the attendees, pointing out the special meaning of establishing the program in the year of the 70th anniversary of the university. He also announced SISU’s commitment to the cultivation of high-level graduates who have solid language proficiency, a global vision and devotion to the country, and are bound to play a leadership role in facilitating international exchanges, especially between China and the B&R countries.

Lukas Kaucky mentioned in his speech that the Czech Republic was one of the earliest countries to establish diplomatic ties with China. In recent years, there have been frequent high-level visits between the two countries. Cooperation in all fields have been pushed forward. Exchanges in education, scientific research and cultural fields have been increasingly active. In short, despite the geographical distance, China and the Czech Republic managed to build long-standing friendship. He also spoke of the similiarities between Czech educator and philosopher Jan Amos Komenský and Chinese educator and thinker Confucius. Kaucky believed that the establishment of the program in SISU would bridge the cultural gaps between the two countries.

During the ceremony, the first class of Czech Studies, which consisted 15 students in total, performed a Czech song LA LA LAJ and dubbed the film Finding Nemo in the Czech language. Pavlina Vondrackova, a foreign expert at SISU, gave a demo lecture. Two of the Czech students currently studying at the School of Chinese Studies and Exchange talked about their life and study in China in both Chinese and Czech. These programs, which demonstrated the outstanding ability of Chinese and Czech students at SISU, were the highlights of the event.

Lukas Kaucky, Richard Krpac, Jiang Feng, Ren Yao and Xu Hong jointly cut the ribbon at the ceremony. Jiang and Kaucky unveiled the nameplate of the Czech Studies Center of SISU. The establishment of the center marks the university’s effort to consolidate the program and its commitment to deepening global and area studies on Czech history and culture, social politics and economy, and China-Czech bilateral relations.

In September 2018, the first class of Czech Studies was created at SISU. The four-year program is aimed to equip the students with a basic knowledge of the Czech language, the country’s literature, history, politics, economy, foreign relations and social culture, which will allow them to work in areas from translation to language teaching, from research to playing leadership roles.

In addition, SISU has been collaborating with Charles University, one of the most prestigious institutes of higher education in the Czech Republic, on program development, faculty training and student exchanges. SISU will recruit experts in the Czech language to build more comprehensive curricula offering a wider range of courses, from Czech national conditions and culture to language and literature. The courses, which are internationally, professionally and pragmatically oriented, will focus on improving language skills in listening, speaking, reading, writing and translating. The teachers will use original textbooks in Czech, conduct the classes bilingually and employ multimedia teaching tools. The students will have the chance to study in the Czech Republic for one year with sponsorship by China Scholarship Council (CSC).