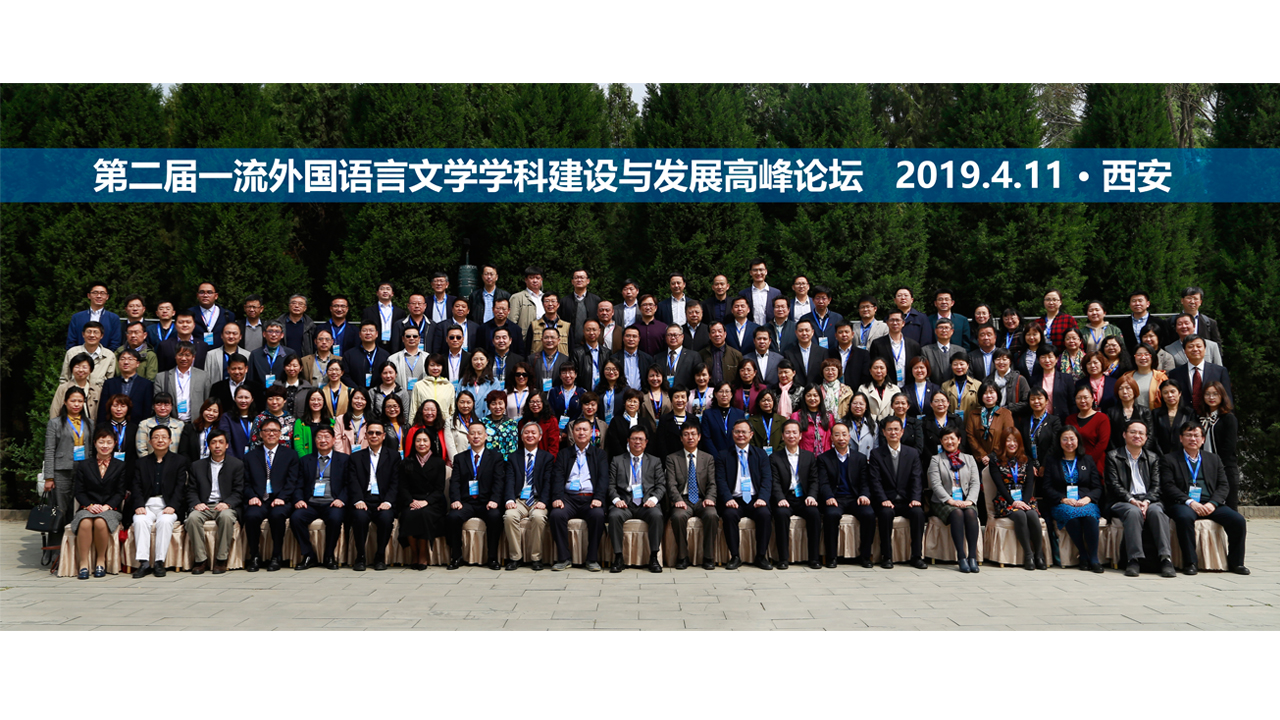 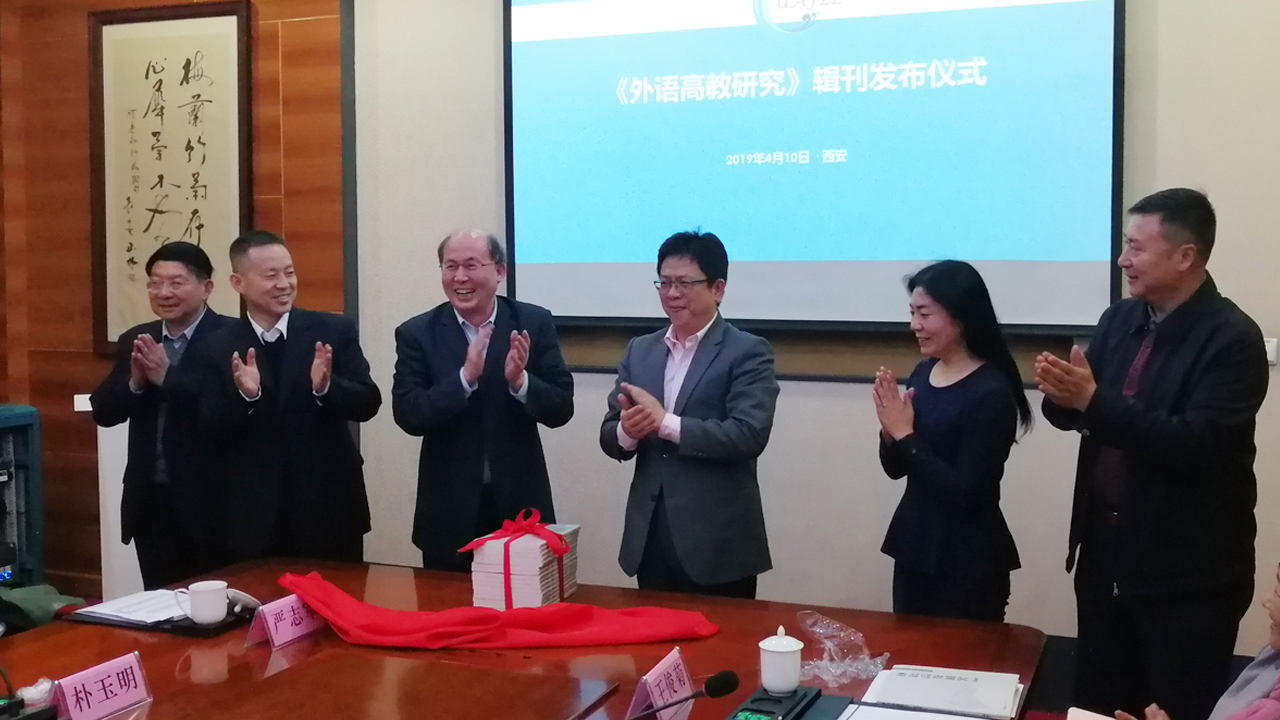 The Second Summit on Building First-Class Foreign Language and Literature Disciplines was held in Xi’an from April 10 to 11, 2019. The event, which was directed at implementing the spirit of the National Education Conference, the Belt and Road Initiative and the Double First-Class Initiative, was jointly hosted by China University Alliance for the Development of Foreign Language and Literature Discipline (CUAFLL), Xi’an International Studies University (XISU) and Shanghai International Studies University (SISU), and was co-sponsored by Shanghai Foreign Language Education Press. Over 200 delegates from more than 150 universities nationwide attended.

During the CUAFLL standing council meeting on the first day of the summit, XISU President Wang Junzhe extended a welcome speech, Li Weiping, CUAFLL secretary-general, delivered a work report and representatives of membership universities exchanged views and ideas. The meeting also led to the approval of the admission of 24 new members, which made the total number of membership universities 177. In addition, the council released a new issue of Foreign Language Higher Education Research, the official journal of the CUAFLL. The journal, which seeks research related to “higher education” and “foreign language studies”, is a new academic platform for teachers and administrators of the field. In his closing remarks, Li Yansong, chairman of the CUAFLL and president of SISU, reaffirmed the CUAFLL’s commitment to building first-class foreign language and literature disciplines with Chinese characteristics.

Identifying the mission and sharing accomplishments

Wang Jingwu, dean of the International Relations Institute of the National University of Defense Technology, hosted the opening ceremony. Jiang Yajun, vice president of XISU, delivered the opening speech. Li Yansong, president of SISU, gave a speech entitled “Honoring the Spirit of the National Education Conference and Promoting the Development of First-Class Foreign Language Disciplines”, in which he addressed the position, principles and dimensions of foreign language disciplines in the new era. Ning Qi, dean of the School of Foreign Languages of Peking University (PKU), talked about his university’s experience in building world-class disciplines and cultivating undergraduate talents in “On Cultivating Foreign Language Professionals in the New Era”.

The first half of the keynote session was hosted by Liu Jianda, vice president of Guangdong University of Foreign Studies. In “Always Prepared: Building First-Class Foreign Language Disciplines for National Defense”, Ji Huaishan, dean of the School of Foreign Studies of the PLA Information Engineering University, discussed his university’s experience in cultivating talents, innovating R&D and serving the PLA. Chang Junyue, vice president of Dalian University of Foreign Languages, talked about “How to Conduct Area Studies and Cultivate Undergraduates in a Time of Change for the Disciplines”. Yu Jiang, vice president of Tianjin Foreign Studies University, ended the first half of the keynote session with “New Technologies for Building First-Class Foreign Language Disciplines”, in which he presented his university’s attempts at using new technologies to promote interdisciplinary research, support national strategies and improve the quality of teaching.

Wang Qiang, vice president of the University of International Business and Economics, hosted the second half of the keynote sessions. Zhang Jian, dean of the School of English and International Studies of Beijing Foreign Studies University, raising the question “Should Foreign Language Disciplines Have More Academic Journals?”, called for more attention to the professional and humanistic dual nature of foreign language disciplines, emphasizing that academic journals of the field should expand their scopes and visions so as to keep up with the development of the field. Yang Jincai, dean of the School of Foreign Studies of Nanjing University, shared his “Thoughts on the Mission of Foreign Language Disciplines in the New Era”, highlighting that in the context of building a community of shared future for mankind, the focus of first-class foreign language education should be on cultivating language professionals with cross-cultural understanding. Piao Yuming, dean of the College of Foreign Languages of Yanbian University, illustrated his understanding on the position and mission of first-class foreign language disciplines, using his university as an example in “On Orientation and Development of First-Class Disciplines Based on Regional Characteristics and Interdisciplinary System.

On April 11, Xu Yonglin, vice president of Shanghai University of International Business and Economics, hosted a meeting to review the 2018 work report and to set up priorities for 2019. Hu Kaibao, director of the CUAFLL’s committee for STEM universities and dean of the School of Foreign Languages of Shanghai Jiao Tong University, reflected on the establishment and structuring of the committee, its achievements in the past year and proposed its plan for 2019. Miao Xingwei, director of the preparatory committee for normal universities and dean of the School of Foreign Languages and Literatures of Beijing Normal University, reported the progress toward the establishment of the committee.