Scientists of SCUT Awarded China's Technological Innovators of the Year 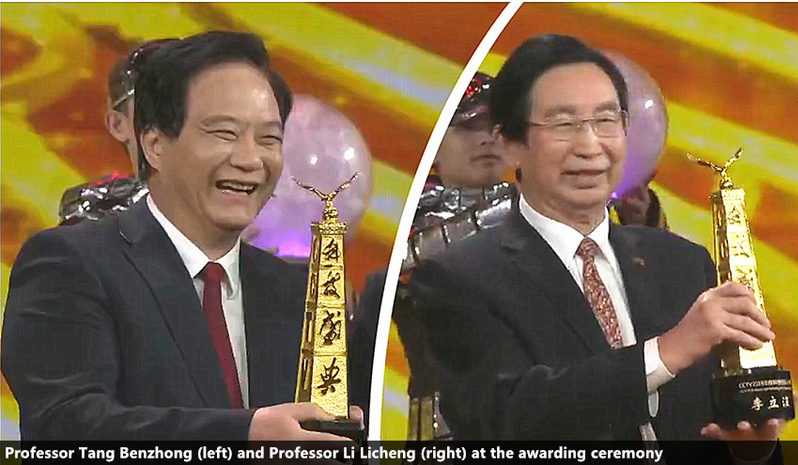 Two prestigious scholars of SCUT, Professor Tang Benzhong and Professor Li Licheng, were honored among the ten laureates that received the nationwide prize of "Technological Innovator of the Year" in 2018.

The awarding ceremony was held in Beijing on January 27, when the above two SCUT professors received high respect for their exceptional contributions to scientific discovery and technological innovation.

Professor Tang Benzhong, who is a member of the Chinese Academy of Sciences, was the first to discover the phenomenon of aggregation-induced emission (AIE), in which certain organic luminophores show higher photoluminescence efficiency in the aggregated state than in solution.

This phenomenon, when applied to different functional materials, can serve various crucial purposes, including high-sensitivity detection in criminal investigations, as well as long-term tracking and visualizing of tumor tissues or cancer cells.

After being discovered in 2001, AIE was ranked among the world's top 100 research themes by Thomson Reuters in 2013, as today there are over 4500 research teams in 80 different countries and regions doing research with respect to it.

The other laureate of SCUT, Professor Li Licheng, is a member of the Chinese Academy of Engineering, who has spent more than 50 years engaging in electric power science. He is known as "the father of direct current transmission in China" for his dedication to ensuring safety and efficiency of power grids and safeguarding the environment during transmitting electricity.

Most of his work played a key role in building electric power infrastructures in China's "West to East" project, by which massive electric power is brought from the west, where most of the country's energy sources are concentrated, to the central and the east, where electricity needs are much higher than the west.

In such a cross-regional grid, ultra-high voltage direct current (UHVDC) transmission, which is Li Licheng's specialty, becomes a core technology since it provides extremely large capacity in long-distance transmission. It has been irreplaceable in supporting the economic growth of the Yangtze River Delta and the Pearl River Delta by providing 1/3 of electric power consumed by these two regions.

The prize of "Technological Innovator of the Year" is a set of annual awards jointly bestowed by the China Central Television and the Chinese Academy of Sciences, along with several governmental institutions including the Ministry of Science and Technology and the Ministry of Education.

In recognition of the extraordinary teams and individuals that make key progress in scientific and technological advances, it is one of the highest honors in China's technological field, with some of the most esteemed scientists including Yuan Longping and Tu Youyou being its winners.