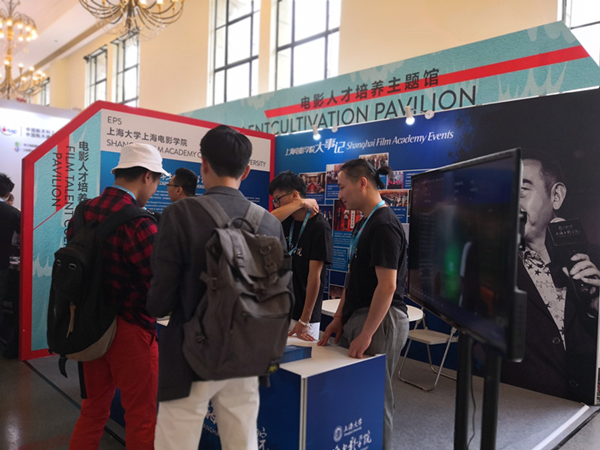 The exhibition attracted attention from many platforms like the Young Film Talent Training Program of xinhuanet.com and the Silk Road International Film Festival. Prof. Liu Zhengzhi from the performance major and Prof. Qu Yigong from the Experiment Center of Shanghai Film Academy introduced the general information of Shanghai Film Academy as well as the characteristics of its majors and creative works to the representatives from the organizations that intend to cooperate and the students who intend to apply for enrollment, and talked with them about issues like the role of Shanghai Film Academy in training talents for Shanghai’s film and TV industry, how to develop a sound atmosphere for creation and exchanges and how to give talents more opportunities for creation and exchanges. The exhibition of Shanghai International Film Festival provides a window for people from all walks of life to learn better about Shanghai Film Academy, and lays a foundation for Shanghai Film Academy to be aligned with the demand for cultural brand construction and the demand of the industrial market in Shanghai and to better train talents for the film industry.