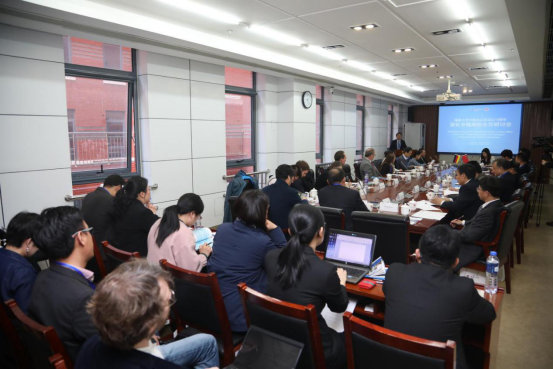 During the opening ceremony, Prof. Ma Huaide, Prof. Hanna Schramm-Klein and Prof. Ulf Richter delivered opening remarks on behalf of the sponsors of the meeting. Prof. Ma first expressed a warm welcome to all delegates and expressed his heartfelt congratulations on the 10th anniversary of the establishment of the China Branch Office of Universität Siegen. He then introduced the academic features, school-running achievements and international cooperation of CUPL, especially its cooperation with Germany. With the Sino-German relations alleviated to a higher state in recent years, the frequent exchanges of visits between the two countries, the continuous expansion of bilateral cooperation in the fields of education and culture, and the fruitful results, Prof. Ma believed that the establishment of a world high-level university was a process of transcending borders and races, mutual-learning of civilizations, gathering of wisdom and hand-in-hand cooperating. The meeting provided a good platform for mutual exchanges and experience sharing between experts and scholars of Chinese and German universities, as well as an opportunity to further explore and enhance the all-round cooperation among universities in the two countries. It is also a significant event after the Project Office of German Universities in China was set up in CUPL.

Hanna Schramm-Klein and Ulf Richter mentioned in their speeches that with the deepening of Sino-German exchanges and the diversification of exchanges, China Branch Office of Universität Siegen would become an important window for Universität Siegen to present the University, the city and even Germany as a whole to Chinese students and scholars; at the same time, the China Branch Office would committed not only to expanding and maintaining the exchanges and cooperation between Universität Siegen and its Chinese partner universities, but also to providing all-round support and assistance to Chinese students and scholars studying and working in Germany.

At the end of the meeting, Prof. Gao Huanyue made a concluding speech. She said that although the roundtable discussion was short, it brought together elites and experts and scholars from Chinese and German universities to summarize successful cooperation modes in personnel training, scientific research, social services, cultural heritage and innovation, international exchanges, and to share cooperation experience, with the objective of assisting students, teachers and researchers of the two countries to cooperate and exchange in more models, wider fields and higher levels in the future.