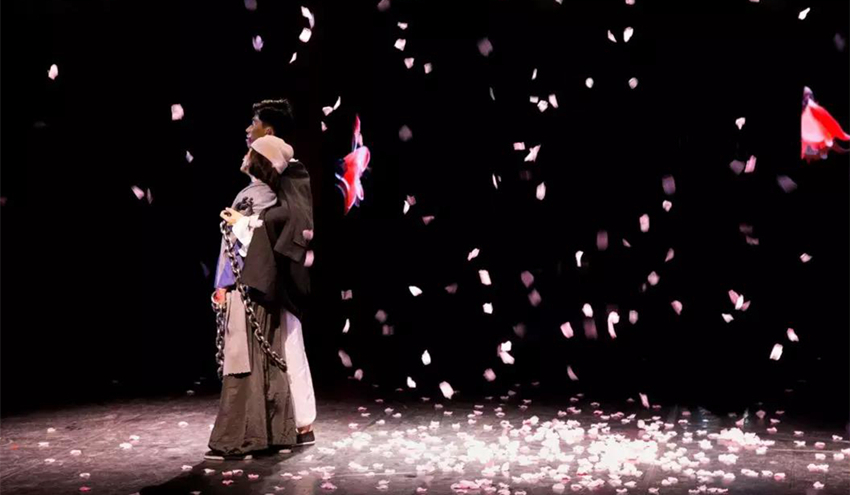 Blood of Revolution: A Romantic Tale, a history drama created by teachers and students of SCUT, made its debut with great success in front of nearly 1,000 people at the University Town last Friday.

The drama tells the real-life story of Zhou Wenyong and Chen Tiejun, two Chinese patriots who developed a romantic relationship during their fights against the corrupted Kuomintang government in the 1920s and finally sacrificed their lives together to the revolution after an uprising failed.

Zhou Wenyong, known as a key leader of the workers movement of Guangzhou at the time, was also a student of the Guangdong First Specialized School of Industry, a predecessor institution of SCUT today.

In February, 1928, days before Zhou Wenyong and his lover were executed by the Kuomintang government at the Red Flower Ridge, Guangzhou, he left a poem of farewell on the wall of the prison, which was widely read even decades after his death:

Now teachers and students of SCUT, being successors of Zhou Wenyong, have made his story reappear on the stage after nearly a century. During a lecture gave by Zhang Xichun, Secretary of the CPC SCUT Committee, before the start of the performance, the audience also learned a lesson on the early history of SCUT.

In 1951, four institutions of higher learning merged together as the foundation for the South China Institute of Technology, which was renamed SCUT in 1988. Among these origins of SCUT was the Guangdong Industrial Institute and its predecessor, the Guangdong First Specialized School of Industry (甲工, Jiagong), known for their extraordinary contributions to the revolution that gave birth to modern-day China.

Jiagong was established in Guangzhou in 1918, providing four majors including mechanics, applied chemistry, dyeing and weaving, and fine arts. It was the only public industrial school back then in Guangdong province, with a great number of its teachers and students being leaders of the youth movement.

Blood of Revolution: A Romantic Tale was designed as the first part of a trilogy that recollects stories of these revolutionaries and heroes. The drama was a joint work orchestrated by the Youth League Committee of SCUT and a few other units, with its crew all being volunteers of current students.

The debut is also one of a series of cultural events marking the 100th anniversary of China’s May Fourth Movement, which were held by SCUT in recent weeks to promote patriotism and progress around the campus.