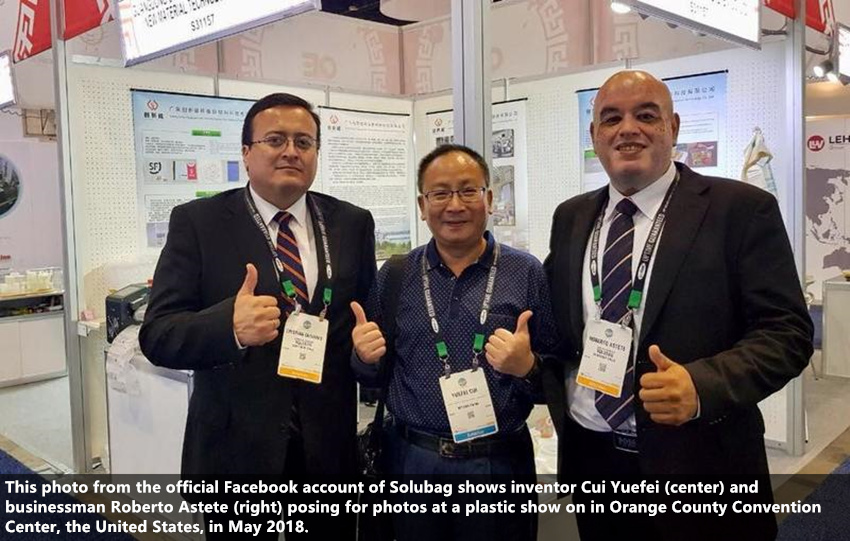 Cui Yuefei, a senior engineer at SCUT, successfully developed a novel type of PVA bags that can dissolve in cold water in minutes to help prevent ocean pollution.
The made-in-China technology, which is now on its way to being fully transferred in the global market, attracted attentions from major media agencies such as Xinhua News and China Daily.
The following news article is an in-depth report concerning details of the invention, published by Xinhua News:
Chilean businessman Roberto Astete has had the same dream for the past years: used plastic cutlery at a diner are automatically sorted into small grinders, then the debris dissolves in water in just a few minutes and is flushed away.
"We don't need to collect, transport and dispose of plastic waste at special facilities anymore. They can be processed easily on site to reduce ocean pollution," Astete explained.
These days, his dream is almost a reality thanks to a new material and processing technology from his Chinese partner.
In late July, Astete's company Solubag and Polye Materials in south China's Guangdong Province jointly launched a series of soluble shopping bags in Santiago, capital of Chile, right before the country enacted a new law barring businesses from giving out plastic bags to customers.
It takes centuries for petrochemical plastic bags to degrade in the ocean, choking marine animals and harming the entire ecosystem.
The bag introduced by the two companies dissolves in water quickly, and Astete even drank the mixture during a press conference to endorse its safety.
According to Chen Gang, chairman of Polyrocks Chemical, Polye's parent firm, the bag's raw material is modified Polyvinyl Alcohol, or PVA, which comes from natural gas or calcium carbide.
"PVA bags dissolve in water in minutes so they won't choke the marine animals. The solution will not pollute water or soil," Chen explained. "This alternative to plastic bags is eco-friendly."
PVA has been used in paint, glue and textile manufacturing since the 1930s. PVA film has also been widely used for packaging in recent years.
However, it was difficult and costly to process this material into shopping bags due to its lack of thermoplasticity, said Cui Yuefei, the bag's inventor and a senior engineer with the South China University of Technology.
Cui had spent years on modifying PVA in laboratories and completed his experiments in 2008. By adding certain agents, he made it easier for the material to be pelleted, blow-molded and made into bags.
The researcher's work caught the attention of Polyrocks, a reputed fire retardant producer that was trying to explore new business ventures. They joined hands in modified PVA industrialization in 2015.
"We were looking for a suitable blow-molding machine in the northeastern Chinese city of Dalian in 2016," Cui told Xinhua. "That's when and where we met Astete."
At that time, the Chilean had been searching for a company capable of and interested in making affordable water soluble bags around the world for over two years.
"I was in the plastic industry and I thought to myself, we can't use petrochemical bags anymore," Astete recalled. "I tried some European and American manufacturers first, but they showed little interest because the profit margin of shopping bags is very small. Then I came to China."
Cui and Polyrocks first focused on hot water soluble bags, which would be more durable for everyday use. But Astete, coming from a country with a long coastline, insisted that the bags should be soluble in cold water.
"The Chilean helped us make this crucial decision in product development," Cui said.
A prototype was produced in just two months, and Polye Materials was soon established for the project.
"The bags launched in Santiago are our third generation products. Their cost is about 1.5 times of that of a normal plastic bag," Cui said. "We expect them to be as cheap as normal ones in our fifth generation."
Li Lingyu, general manager of Polye told Xinhua that the company's yearly capacity of modified PVA pellets will reach 10,000 tonnes by November. "That's about 500 million water soluble bags," she said.
Astete hopes the bags will hit the shelves in Chile by the end of this year and has been trying to persuade his Chinese partner to open factories in his country.
"After the press conference, I got so many calls and there are thousands of inquiry emails in my inbox. It's crazy, really, really crazy," Astete said. "We need to further increase our capacity. Eighty-five percent of the inquiry calls are from outside Chile, such as Mexico, Germany, France, and Spain."
Polye and Solubag plan to start a joint venture in Hong Kong to deal with sales in the global market.
Plastic pollution is considered a major threat to oceans worldwide. At this year's World Ocean's Day on June 8, Antonio Guterres, Secretary-General of the United Nations, called on the world to stop plastic pollution from contaminating the world's oceans.
Eighty percent of all pollution in the sea comes from the land, including some eight million tonnes of plastic waste each year, which have resulted in the deaths of one million seabirds and 100,000 marine mammals.
Besides Chile, Britain is set to ban all sales of single-use plastics, including plastic straws and cotton swabs. Kenya and Morocco also have similar restrictions.
"Bags are just the start. We can also use modified PVA to make glass lids, straws, diapers and to replace products made from petrochemical plastics," Astete said. "My country is small but people share a similar goal to have a beautiful, clean environment. It's also the aspiration of all humanity."