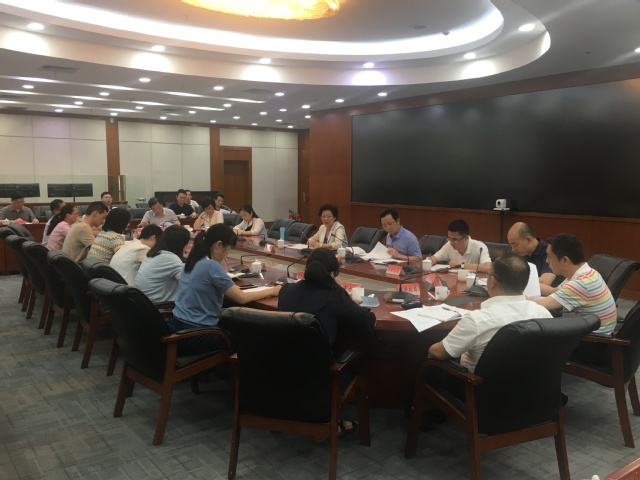 On June 15, Guo Guirong, deputy mayor of Xiamen City, presided over the Xiamen mobilization meeting on the support and coordination work with regard to the 4th China Collegiate Internet+ Innovation and Entrepreneurship Competition (hereinafter, the Competition). Wu Weiping, deputy secretary general of the Xiamen Municipal Government (XMG), leaders of the coordination group, Deng Chaohui, member of the Standing Committee of the Party Committee of our school, as well as those in charge of the working group of the Preparatory Leading Group Office of Xiamen University (XMU) attended the event.

Deng Zhaohu informed the meeting about the latest progress of the preparatory work for the Competition as well as the priorities in the following stage. She also threw light on the matters that would entail the government’s coordination and support. Deng said that with the effective leadership of the Ministry of Education and the Fujian Provincial Government and the strong support of the Xiamen Municipal Government, the preparations for the Competition have progressed smoothly. The attendees then went in depth on the specific matters required of the government for support and started to build direct connections on relevant tasks.

Guo Guirong pointed out that the 4th Internet + Competition is an important platform to showcase the glamor of Xiamen and Xiamen University, and also provides a good opportunity for Xiamen to further draw in businesses, investments and the best brains from across the globe and promote the conversion of innovation achievements into market viable businesses. She stressed that sectors at all levels must have a deep understanding of the significance of hosting the upcoming Competition, and do their utmost to run a high-level global event with distinct features. To get fully geared up in the lead-up to the Competition, Guo noted that it is important to establish a sound coordination mechanism that features the linkage between XMG and XMU with the latter playing the bigger role, focus on major issues and key links, further refine the work plan, set out timetables for each and every task, enhance personal responsibilities, define goals, organize and orchestrate with high efficiency.

The meeting also covered the communication and working mechanisms needed for the next stage, stressing the importance of the linkage between XMU and the municipal government in the days to come. Meanwhile, all those present at the meeting hoped to deliver an “amazing global pageant” on innovation and entrepreneurship this time.

Recently, the Xiamen Municipal Government has reportedly issued an official document to establish a leading group in a bid to do a better job of support and coordination for the Competition. Mayor Zhuang Jiahan headed the group as the chief, Ye Zhonggeng, member of the standing committee of municipal Party committee,minister of the Publicity Department, and Guo Guirong, deputy mayor, serving as the deputy chiefs. In addition, directly below the leading group, two sub-groups were set up, respectively responsible for comprehensive coordination and the conversion of innovations.