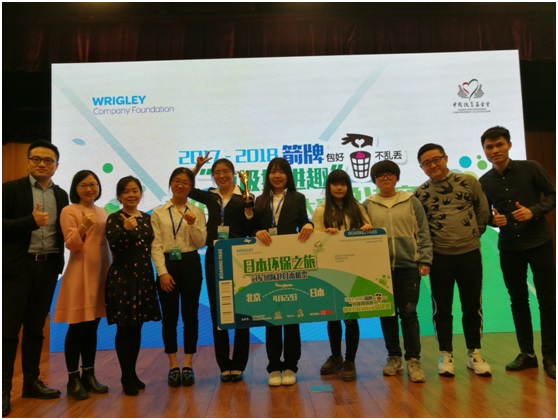 On the afternoon of March 23, the national finals of 2017-2018 Wrigley “Slam Dunk Your Junk” National Youth Public Service Practice Contest was held at the lecture hall of Beijing Forestry University. The contest kicked off with a fictional love story “You (sorting) make me (waste) different”, which was brought by Qiao Biting, captain of FY, a XMU team composed of 5 undergraduates from the College of the Environment and Ecology of Xiamen University. The performance of the XMU team held the judges and audience spellbound, leading the latter into the world of garbage classification. On the strength of their innovative scheme and their excellence in the live question and answer session, the FY team finally took the national championship by winning the unanimous acclaim from the judges, who were from China Mars Wrigley, China Foundation for Poverty Alleviation as well as the spheres of creative marketing, innovative thinking and environmental protection.

Themed “Slam Dunk Your Junk ”, this contest attracted as many as 1,408 teams and engaged them in varied levels of qualification trials from the intramural, regional to the national preliminaries and national finals. With the solid support of the Student Affairs Office of Xiang’an Campus of XMU and under the guidance of Guo Jianqun and Liu Tao from the Office of Residence Life, the FY team took almost half a year to advance through rounds of competitions all the way to the finals, outperforming their rivals for their novel mode of garbage classification, a mode which is customized for the college apartments in China and characterized by its four major considerations: first, the consideration of the “national conditions”, largely focusing on China’s college campuses where students are confused as to “how to sort the garbage”, “why to do so” etc; second, the consideration of “national ethos” by means of questionnaire surveys and interviews, striving for a more optimal scheme in accordance with the pubic opinion on garbage disposal; third, the consideration of “national pathos”, mainly taking into account three major factors, i.e., cognition, emotion and identification, in an effort to boost students’ motivation and participation in the activities; fourth, the consideration of “human nature” by introducing the “community contract system” to swell the ranks of the personnel to ensure a sustainable development of the activities regarding garbage classification.