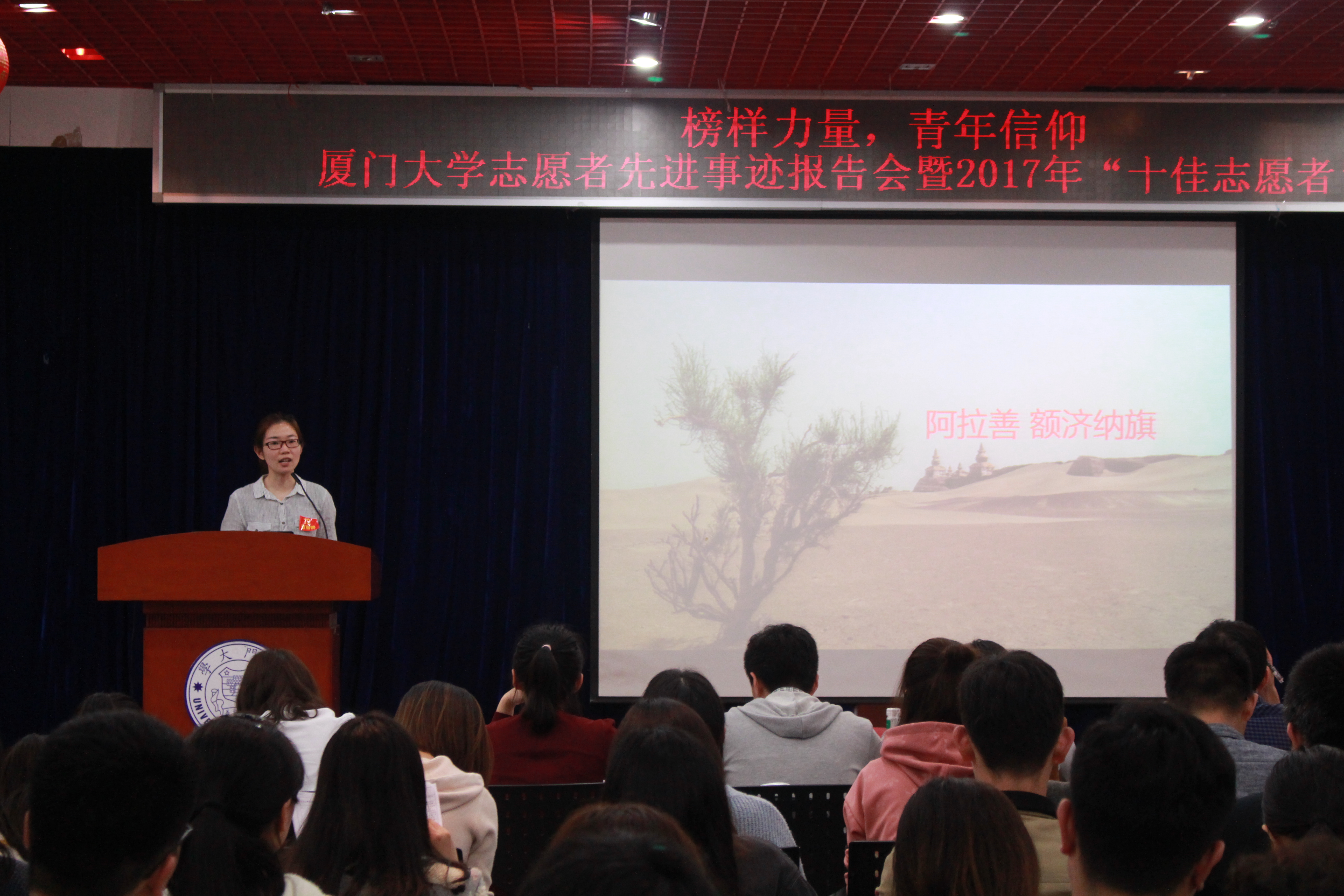 Recently, XMU Youth League Committee has announced XMU top 10 volunteers in 2017. Earlier on March 5, to promote a volunteering culture and enhance the peer influence of role models, the Youth Committee of XMU convened a report meeting on the meritorious deeds of XMU volunteers themed “Power of Examples and Faith of Youth”and the meeting was held in the form of a presentation contest among the nominatd volunteers to select the best 10. At the meeting, 22 nominees, who were recommended by varied voluntary associations and colleges of XMU, competed against one another to give a 5-minute speech each, sharing their stories, insights and thoughts of serving as a volunteer. A panel of 65 judges rated the presentation of each nominee and  decided on the final ranking of the volunteers.

To begin with, Li Yutian, from Overseas Education College, started volunteering as an overseas teacher in 2015. Even during the unrest in Turkey, he grappled with the fear of terrorist attacks and the barriers of language and culture, and accomplished his mission with distinction. During his stay in Turkey, he taught all together more than 500 students and organized 42 activities to promote Chinese culture, which reached an audience of over 3000 people there, including students, locals, and government officials. His efforts and commitment in the great cause of promoting Chinese language and culture merit our acclaim.

Sun Zhenlin, from the School of Law, served as a volunteer guide on campus. She did not just show the way to visitors, but also spread the legacy and culture of XMU through every amazing story she told to the latter.

Huang Yanshuang, from the School of Economics, started out as a common volunteer in the Service Center and ended up becoming a core member on the XMU Volunteer Committee. From holding a charity sale which raised 360,000 yuan for poor students to volunteering during the BRICS summit, Huan Yanshuang has made volunteering part of her life and sowed the seeds of selfless love in the hearts of her peers.

Lin Yixin is a member of a XMU volunteer teachers’ organization called “Bamboo Dragonfly”. During his undergraduate years, he devoted all his summer vacations to volunteer teaching in Tibet, transmitting not only knowledge but also hope and love.

As a student from a rural area, Chenxi, from the School of Public Affairs, spent her spare time tutoring and organizing “love activities” for the children of immigrant workers.

Ma Yutong, from the School of Aerospace Engineering, shared through a video his experience of serving as a volunteer teacher in Haiyuan, Ningxia Province. He urged more students from XMU to pay more attention to the vast underdeveloped west of China and embrace the “beautiful sunrise in the West with their arms of youth”.

The presentation of Yu Yinwei, a student from the School of Mathematical Science, struck the audience as plain but humorous in style, which is typical of a “science major”, driving home the point that volunteering is not just about getting the job done, but showing love and devotion and passing on positive vibes to the society.

Huang Mingyan, from the School of Journalism and Communication, brought to the audience her story by using the following four key words—gratitude, responsibility, faith, and ideal. She raised money and built a library in the rural area to encourage the children there to broaden their horizons through reading. She sincerely called on more young people to direct their attention to the countryside, go into the villages and do their part in the construction of the rural areas.

Ding Dawei, from the School of Law, had volunteered in Xiamen International Fair for Investment and Trade. Through a couple of small stories about his volunteering in the Fair, he put across to his peers in the audience his reflections and insights: volunteering is not just about giving, but also gaining and growing up.

Zhou Wenting, from the Art College, made use of her talent in art and launched along with her fellow art majors an art exhibition themed “Rebirth” in the wake of the ravages of typhoon Meranti. The limbs and boughs of the fallen trees were brought back to life to tell the tales of XMUers about their fierce fight against the super typhoon and their never-say-die spirit embodied in their efforts to rebuild afterwards.

To sum it up, over the preceding year of 2017, volunteering continued to gain momentum among XMU faculty and students, who participated in volunteer activities with increasing engagement and commitment. The registered volunteers reached a total of 23740, with a total of 541,000 cumulative hours committed to 1256 volunteer projects.