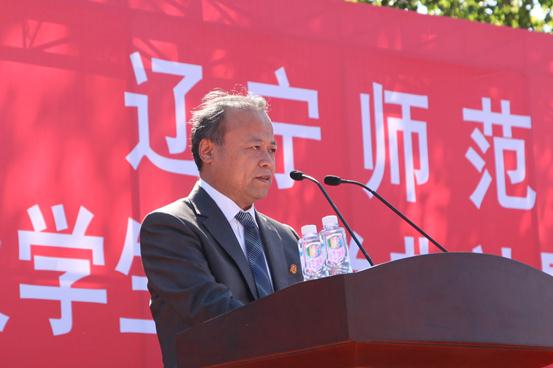 LNNU President Han Zenglin Delivered a Speech.
The school opening ceremony begins with the grand national anthem. LNNU President Han Zenglin welcomed the freshmen and new postgraduates of 2015 warmheartedly on behalf of LNNU Party committee and the administration body. President Han expressed sincere Respect and regard to these freshmen’s parents. President Han says that a university is a holy temple for fostering scientific spirit and humanism and a rich soil for talents growing; LNNU will undertake its responsibility and the trust of students with its deep deposit and great spirit of development. President Han hopes that when studying, the freshmen of 2015 could cherish great ambition, hard-working spirit and heart of gratitude and become responsible talents in the process of great national revival.
Miao Zhiwen, Dean of the School of Physical Education, gives a speech on behalf of LNNU faculty. He hopes that the freshmen could improve their ability, perfect their personalities, improve their insights into problems, carefully plan university life, read more books, keep fit and healthy and inherit LNNU spirit and intelligence in the future.
Wang Bin, headmaster of Dalian No.49 Middle School, 1991 alumnus of LNNU from the School of Mathematics, gives a speech on behalf of the LNNU alumni. He recalls his four years college life and 20years career life. He encourages the fellow students to lay solid foundations in college life, gain strong ability and give credit to our university when finishing studying. He wishes that LNNU will prosper in every aspect and create more glories in the future.
Freshmen representatives , undergraduate student Jia Yuning from the School of Mathematics and post graduate student Zhang Xinran from the School of Politics and Administration give speeches on behalf of the freshmen and other students. They express the determination to adhere to LNNU motto, study hard, lay solid foundation, have high ambitions and makes progress in both morality and ability. 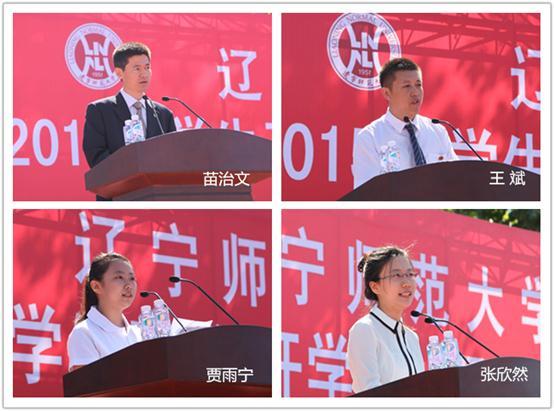 After the opening ceremony the military training mobilization meeting of the undergraduates of 2015 is held. Quan Shuanghou, the director of School Armed Department, presides over the meeting.  Su Jian, the Secretary of the Commission for Discipline Inspection in LNNU makes the mobilization speech. On behalf of LNNU Party Committee and the administration body, Sujian expresses sincere thanks to the officers and soldiers from the second regiment of the second division of the  PLA army reserve, who give great support to LNNU military training, and also extends regards to the student training officers and students under training. Sujian has three demands for military training: one is the union of knowledge and behavior, and strict requirements; two is training scientifically and with good quality; and three is detailed organization and safety ensured. Li Xiaohan, the student training officer and Jiang Shangru, the student under training from the School of Marxism,  give speeches successively, expressing their determination to fulfill the military training. 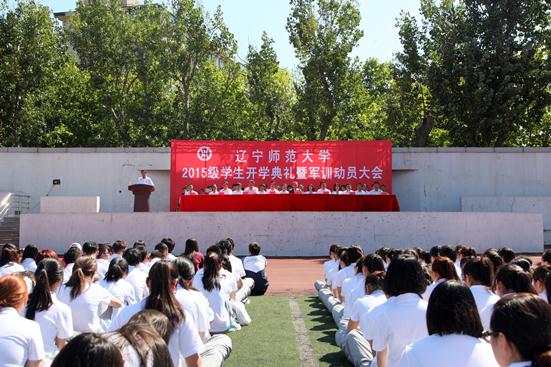