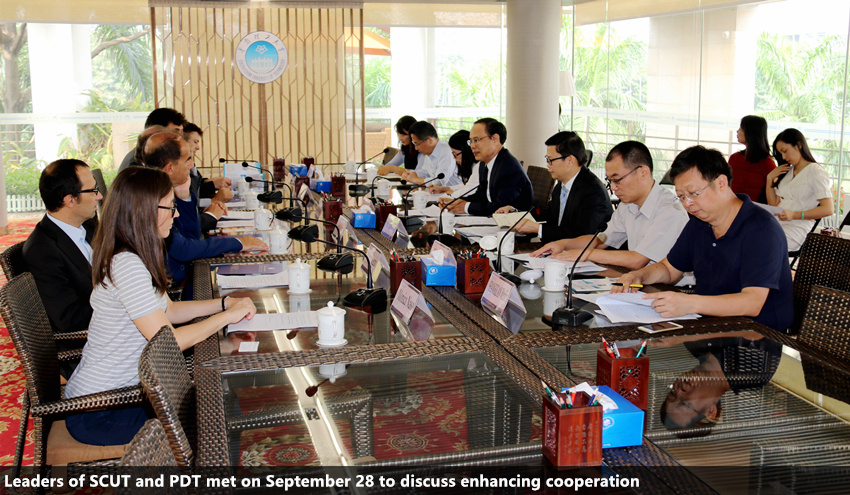 SCUT and the Polytechnic University of Turin (Politecnico di Torino, PDT), Italy, will be enhancing their long-term partnership in scientific research and student training, after a delegation from PDT visited SCUT before China's National Day holiday.
The delegation, led by Guido Saracco, PDT’s Rector, was received by Qiu Xueqing, SCUT’s Vice President, at the Shaw Building of Humanities on September 28.
It was Guido Saracco’s first visit to China after his latest appointment as Rector. On the day before the delegates came to SCUT, he also met with Xu Ruisheng, Vice Governor of Guangdong province, who highly praised the productive collaboration between SCUT and PDT.
Qiu Xueqing said to the delegates that SCUT wishes to enlarge the partnership with PDT in subjects such as architecture and mechanical engineering, and thus to advance the progress of building the Guangzhou International Campus.
SCUT and PDT, when the opportunity is ripe, are expected to work together on developing further cooperation in emerging scientific fields, including building research centers in green architecture and smart city technology, and in mechanical power and automotive engineering.
It has been nearly a decade since the two universities set up connections and valued each other as a vital partner. They have so far achieved extraordinary accomplishments in student training and scientific research cooperation, including co-running the South China-Turin Joint Laboratory, and setting up joint programs of Master’s degree, which is still under planning.
Guido Saracco said in the meeting that PDT is looking forward to joining the Guangzhou International Campus at a proper time, with particular interest in cooperating with SCUT’s School of Green Architecture and Smart Cities, and the Shien-Ming Wu School of Intelligent Engineering.
The two sides both agreed to carry out more cooperative projects in coordinate innovation and R&D, which are expected to help Guangdong improve the level of scientific research and technology transfer.
The Polytechnic University of Turin is one of the oldest and largest polytechnic universities in Italy. It was ranked the world’s 33rd in engineering and technology by the 2018 QS World University Rankings, with its art history, civil engineering, architecture, and electronic engineering ranked within the global top 50.