SCUT and U of Western Australia Stick to Cooperative Commitments 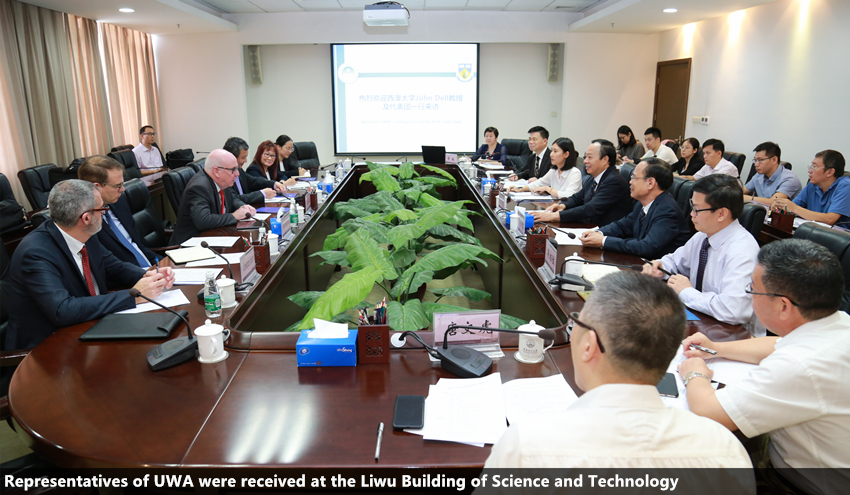 SCUT is working with the University of Western Australia (UWA) on carrying out multiple cooperative programs, including setting up a new faculty of marine science and engineering, as well as continuing joint efforts at the Sino-Australia College program.
A delegation from UWA’s Faculty of Engineering and Mathematical Sciences, led by John Dell, UWA’s Pro Vice-Chancellor, paid a visit to SCUT on September 14, when Zhang Xichun, Secretary of the CPC SCUT Committee, and Qiu Xueqing, Vice President of SCUT, had a meeting with them at the Wushan Campus.
Zhang Xichun said in the meeting that the establishment of SCUT’s School of Marine Science and Engineering is a major effort of the university to serve the development of the region and the country, and a vital part in the blueprint of the Guangzhou International Campus.
Since the agreement of building this school was signed between SCUT and UWA in last May, the two universities have been maintaining close connections and are now getting prepared in all aspects to start the construction progress.
In another cooperative initiative, the Sino-Australia College program that was set up in January 2017, the two universities have been making steady progress in providing “3+2” Combined Bachelor’s/Master’s courses in software engineering, electrical engineering and automation, and environmental engineering.
John Dell, after introducing the basic situation of UWA’s Oceans Institute, invited SCUT to participate in UWA’s projects concerning marine and coastal engineering.
He also indicated that UWA is fully committed to the Sino-Australia College, and the faculty of UWA considers students of SCUT as its own while course settings are optimized for needs of students of SCUT.
The delegation, after the meeting with Zhang Xichun, also held panel discussions with related schools of SCUT, and then visited students of the Sino-Australia Classes.