2nd December – Cheng Jiwei, vice mayor of Jinzhou, visited DUT on the afternoon of 2nd December. President Guo Dongming welcomed the visiters in room 312 of the main building, accompanied by the charger of Institution of Science and Technology. 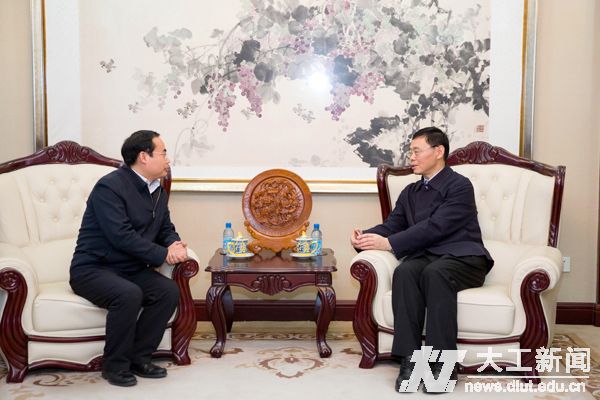 Guo warmly welcomed Cheng’s delegation. He expressed that it is the duty of DUT to serve local economics and social development. DUT has always been combining research with practical production, thus providing talents and innovation resource for local economics. In the future, DUT will go on support Jinzhou through a series of co-operations.

Cheng thanked for DUT’s support especially in the fields of solar energy and photovoltaic production. He invited DUT to participate in the “colleges investigate Jinzhou” activity in December and hoped to be supported in terms of advanced talents and R&D. Later, Cheng held a discussion with chargers from Institution of Science and Technology and Institution of Development, as well as some other departments.

DUT signed a long-term cooperation contract with Jinzhou in 2009. Since then more than 30 projects, which is worth about 20 millions Yuan and involves petrochemical industry, harbor construction, new material and energy saving, have been launched in order to promote relative industries in Jinzhou.