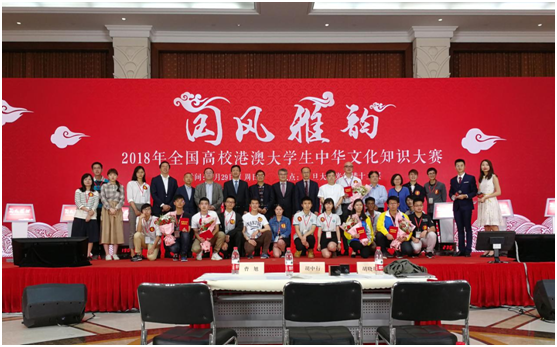 On April 29, Fudan University in Shanghai witnessed the opening of the National Chinese Culture Quiz Competition for College Students from Hong Kong and Macao themed “Oriental style and rhyme”. The Xiamen University team cut a fine figure in the competition and walked away with the championship. The two contestants on the team were respectively Chen Diwei (Macau), a third-year graduate student and Feng Xiankai (Hong Kong), a third-year undergraduate, both of whom are from the College of Humanities of XMU.

The quiz competition comprised three segments, i.e., "Give it a shot", "hang in there", and "duke it out"，and it took the forms of required questions, quick response questions, and risky questions to test the students’ knowledge about Chinese classical poetry, historical allusions and folk customs and culture. In the meantime, the competition also put to test to a full extent the players' pyschological strength and resilience. In the first segment, the XMU team forestalled their opponents by giving full play to their prodigious memory of the knowledge on Chinese culture, and they further extended the lead in the second segment for their quick and accurate response, and showed remarkable courage and composure in Segment Three, securing the first place in the end. Their live performance par excellence received unanimous acclaim from the judges. After the fierce contest, XMU team won the championship by a landslide, and the silver and the bronze went to Shanghai University of International Business and Economics and Macau University of Science and Technology respectively.

To gear up for the game, the College of Humanities built the XMU team and started to select the best contestants way ahead of schedule. Meanwhile, the college offered the team multiple guidances and assigned Student Counselor Ma Xianghua to head the team. The quiz competition enabled XMU players to engage and exchange with their counterparts from other universities, widen their horizons, harvest friendship, meanwhile fully showcase XMUers' cultivation in Chinese culture.