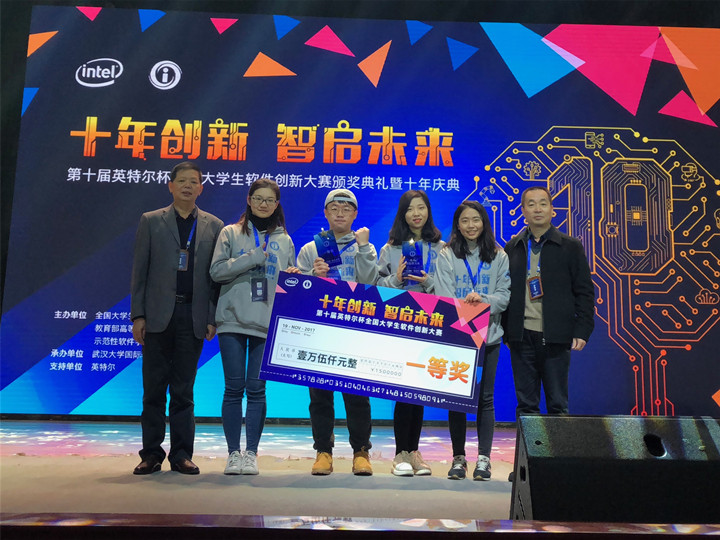 With the guidance of the teachers She Yingying and Liu Fang, Myvie team consists of 4 members, all of whom are from the School of Software, including Ji Yingxuan, a first-year graduate student, He Hao, a third-year graduate student, Shen Yanjun and Zhou Ziyi, undergraduates of class of 2017. The team’s creation received unanimous praise from the judges after rounds of fierce contests. AIAD Smart Advertisement Designer is an ad designing software based on deep learning, aimed at helping self-employed businessmen make their own video advertisements. This is a user-friendly software developed with special technique, enabling the users to make personalized video ads easily and quickly in the era when video marketing is going viral, therefore meeting the mounting demands for video ads, the making of which would otherwise have been highly professional, sophisticated and costly.

A formidable lineup of dignitaries attended the awarding ceremony, including Academician of the Chinese Academy of Sciences  Shu Hongbing, Academician of Chinese Academy of Engineering Zhang Raoxue, Academician of Chinese Academy of Engineering Ni Guangnan and Yang Qiubo, vice director of Science and Engineering Division of Higher Education Department of Ministry of Education. As the special adviser, Academician Ni Guangnan pointed out that contests like this speed up young talent development and provide necessary experiences for the boom of AI in China. China is now in the best innovation period in history, and ranks first in the world for its market, the number of talents, and shall take the lead in quality as well in the future. He hopes that high-tech companies like Intel will persistently support the education of Chinese software specialists.