Having dedicated himself to the field of genetics and rice biology for over four decades, Professor Zhu Yingguo, one of the most prestigious academicians of the Chinese Academy of Engineering who is often described as ’the father of hybrid rice HL-type’, died on August 9, 2017 at the age of 78. As a way to commemorate some of his most measurable achievements and to present a more complete figure of Professor Zhu Yingguo, a corps of WHUers, mainly comprising professors and doctoral students from the Department of Art decided to launch the very first movie fully financed, filmed and edited by WHU: Zhu Yingguo.

It took almost one year to collect fragments of information, and to brainstorm and polish the original script, before shooting finally started in November, 2018. It is likely to continue for approximately half a year and the release is planned for October or November this year.

Two interweaving story lines run through the entire film. One takes place in the present, telling the story of Professor Lang who takes up the shooting assignment of Zhu Yingguo. The other offers recollections from various people who surrounded Professor Zhu before he passed away during Lang’s pre-shooting interview. The recollections are strung together to depict the growth track and career trajectory of Professor Zhu from his adolescence to adulthood. In order to distinguish the two lines, the recollection line is filmed in black and white. Images of the film Images of the film

Both his scientific achievements and the personal life of Professor Zhu are given equal importance in the shooting to present a more vivid image of the character. In the movie Zhu Yingguo is portrayed as humble, burying himself in teaching and scientific research. Yang Cheng, a professor from the Department of Art, who plays Zhu Yingguo in the movie, says that Zhu Yingguo should have been the backbone of the family right after adolescence because financially it was extremely tough for a rural family to forsake the labors of a son in favor of financing his college years. It was against such backdrop that Zhu Yingguo matured into his later self.

The filming process is not without its challenges. Though WHU has offered maximum support, the fund is only a fraction of what is needed and the filming team continues to face various challenges. Take, for instance, the physical condition of the shooting locations. Most shooting takes place in three places. Some scenes take place on the campus of WHU, which seems to be the easiest part. However, details such as redecorating some buildings back to the style prevalent in 1960s are really nerve-racking and require intense negotiation. Some scenes are filmed in a mountainous area in Xiang Yang, Hubei Province. To shoot this part, the team lived in the mountain for about ten days without a dedicated place to sleep, without water supply or transportation. Others are filmed in Hainan, a province in southern China. Even in winter, the sunlight in Hainan is still strong, which caused overexposure of the skin to sunlight. 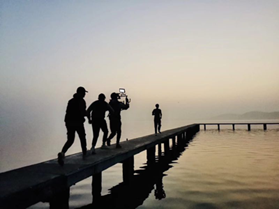 A glimpse of the filming team

The very first movie autonomously filmed by WHU is of great significance in many ways. From an educational aspect, it demonstrates a manifestation of scientific research spirit in a visual and vivid way. Professor Zhu retained a single-minded devotion to the combination of basic research, applied research and industry of hybrid rice that kept him working until his last days. His perseverance, alongside his truth-seeking and pragmatic spirit, has already set an example for future generations.

“It offers me a great opportunity to balance teaching and artistic practice, as well as to realize my own pursuits of artistry”, said Professor Yang Cheng.

What’s more, it epitomizes WHU’s appreciation and grasp of cinematics in over a decade since the Department of Arts’ establishment in 2003. It is beyond question that this movie should not pursue commercial goals or be a mere biographical or literary film. Nor is it a pure artistic film although it pursues high-quality artistic and aesthetic value by applying different narrative styles and adopting specific shooting techniques such as fixed shooting to enhance the sense of form.

Then what on earth distinguishes it from the above? “It is a movie autonomously filmed by WHU, featuring distinct WHU characteristics. It might represent a new genre, a new way of film-making”, says Professor Yang Cheng.