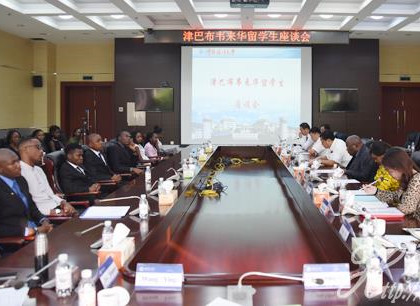 President Yu welcomed Minister Mushohwe who was on his second visit to OUC and the delegation. The President also expressed his thanks to Hengshun Zhongsheng Group for its funding of the program. He said that Zimbabwean students at OUC study hard, actively engage in artistic and sporting activities, and have established deep friendship with Chinese students. President Yu pointed out that this program is highly meaningful for it cultivates talent who will shape the future of Sino-Zimbabwean relations.

Minister Mushohwe thanked OUC for its effort in supporting this program. He remarked that China and Zimbabwe have a lot in common in terms of cultural values, and Zimbabwean students would gain recognition of the international community after their study at OUC. He hoped that OUC would also send Chinese students to study in Zimbabwe so as to deepen mutual understanding between the two countries and strengthen friendship.

Later, Minister Mushohwe joined the meeting with Zimbabwean students from the class of 2016. Professor Qin Shanghai, Dean of the College of International Education moderated the session. Professor Li Jian, Deputy Dean of the college briefly introduced the visiting students’ study and life at the university. A student representative reported on the one-year study experience of the Zimbabwean students. Associate Professor Fu Xiumei from the School of Economics, head teacher of the international economy and trade class for Zimbabwean students, shared some basics about the class. Minister Mushohwe encouraged the students to learn Chinese well and graduate with outstanding grades. 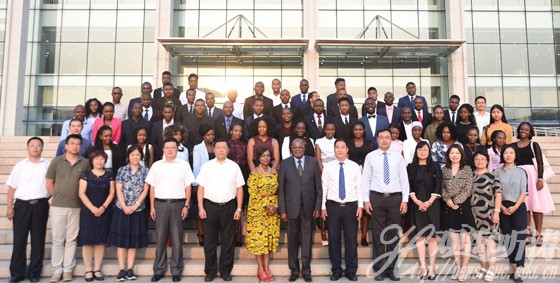 Group photo of all participants at the meeting